YES! Obama Getting Challenged In Court…Slapped With A Lawsuit For His Executive Actions On THIS!

Obama is about to get slapped[1] with his first challenge in court over his gun control executive actions. Good. Not only is he being challenged on his orders on immigration in court, he’s now being brought to task on guns. Virtually everything Obama has done has been unconstitutional and should be negated. Hopefully, this is the start of that. There will be many, many more lawsuits to come and I still predict that this will go down as the most lawless and corrupt presidency in history. Obama has blatantly skirted Congress at every given opportunity because they would not let him have his way. Now, the courts will come down on this. I just pray that there are still honest judges out there that will nail him for it. 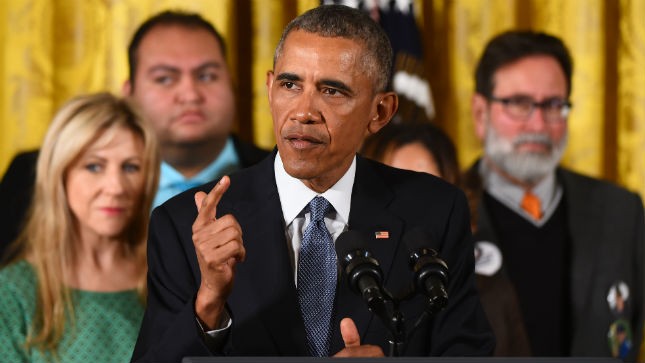 President Obama is facing the first court challenge over his executive action on guns.

On the same day[3] the Supreme Court agreed to hear a challenge to Obama’s action on immigration, the conservative advocacy group Freedom Watch announced it is filing a lawsui[4]t against the controversial gun orders.

Freedom Watch accuses Obama of circumventing Congress to “invent” new gun laws.
“The president states that he is doing so purely because he does not like the legislative decisions of the Congress,” wrote Larry Klayman, the founder of Freedom Watch, who is also a National Rifle Association member.

This will only be the beginning of legal actions against Obama. Unfortunately, many legal experts believe the courts will uphold his executive actions. And why not… Obama has carefully populated the bench with judges sympathetic to his moves and political stances. Freedom Watch is right… Obama is illegally and unconstitutionally redefining our gun laws. The lawsuit was filed in the U.S. District Court for the Southern District of Florida. In addition to Obama, it also names as defendants Attorney General Loretta Lynch and Thomas Brandon, director of the Bureau of Alcohol, Tobacco, Firearms and Explosives. Fingers crossed, but I’m not holding my breath over this.