A Solution to Illinois

Normally when we talk about failed states, we mean nations, like socialist Venezuela or the Islam-torn hellholes of the Middle East. But sometimes the reference is to a state in the Union, namely Illinois. John Kass summarizes the mess liberal rule has created:

Illinois hasn’t had a state budget for years. The state continues to spend money it doesn’t have, and the state’s credit ratings have dropped, increasing the cost of borrowing more money we don’t have to keep the rotten shebang going.

Bills pile up; Moody’s Investor Service says taxpayers are on the hook for $251 billion in unfunded public union pension liabilities.

Boss Mike Madigan, king of the Democrats who control things, wants tax increases but no real structural reform to bring stability to The Venezuela of the Midwest.

And the whispers of bankruptcy won’t help the average (remaining) taxpaying chumbolones like you and me who don’t want to leave our homes but who’ll get stuck with the bills.

Fortunately, Kass has a solution. Voting Democrats out of office and replacing them with fiscally responsible adults is not an option due to the massive gravity of Chicago, which pulls the entire state into moonbattery. So Kass proposes the next best thing: dissolve the state, dividing the territory between its neighbors.

However, the source of the state’s problems would remain. Kass suggests giving Chicago to Wisconsin and renaming it “South Milwaukee,” but why would Wisconsin take it? He then gets down to more serious proposals:

I propose carving out 40 acres around the mayor’s home so [Chicago Mayor Rahm Emanuel] might be prince of his own country:

A grant of land as large as a case of the soda pop she taxes, so that she might stand on it and proclaim herself Queen of Taxwinkletopia.

As for the rest of Chicago,

If there are portions of Illinois that the other states don’t want, they may be left as federal territory, a wilderness where only the strong survive and peasants and friendly propagandists kneel and beg for crumbs. You already know the name of this wasteland:

The sovereign of Madiganistan would presumably be Michael Madigan, speaker of the Illinois House of Representatives and longest-serving leader of any state legislature. He has been called the Real Governor of Illinois.

The Windy City moonbattery that is pulling a whole state into insolvency would be divided among three tiny nations where the damage might be easier to contain. Since they would be totally dysfunctional, the United Nations could make itself useful for once by stepping in to administrate them.

Until a cure for moonbattery is discovered, it would be hard to imagine a better solution. 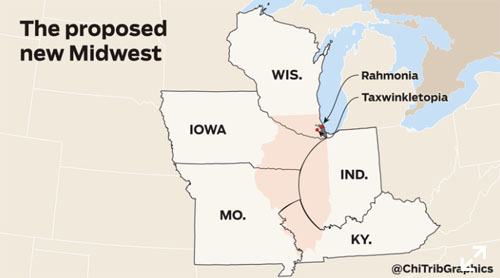