Activists Planned to Burn the U.S. Flag in a NYC Park – But When They Showed Up, These Guys Were Waiting

It’s interesting how liberals are so happy to trash police and the military, yet when they get in trouble, go instantly running right for protection from the people they love to trash. And that’s exactly what happened when a group of anti-police protesters showed up at a New York City park planning to burn the American flag, only to be confronted by patriotic counter-protesters. 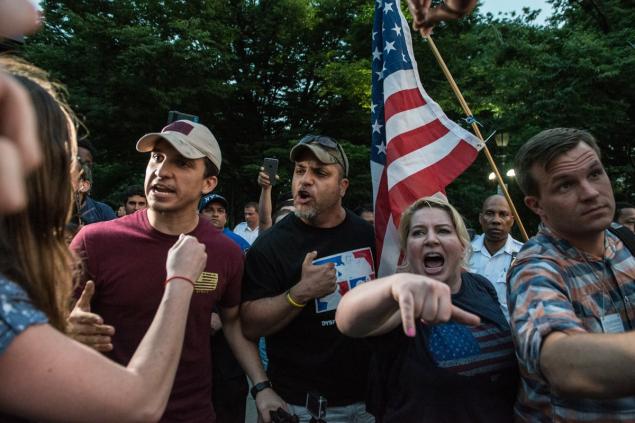 Anti-police activists were set to burn the American flag at a New York City park Wednesday evening, but their plans seemingly changed when dozens of bikers and veterans came out to counter protest.

Flocking to Brooklyn’s Fort Greene Park, individuals opposed to burning the U.S. flag waited for the “Disarm NYPD” group to arrive. While most urged for peace, several bikers threatened violence toward anyone who would burn the American flag.

“We’re here to f*** up tiny liberal punks,” a biker who refused to identify himself told TheBlaze.

Seemingly intimidated by the large group gathered in support of the American flag, the anti-police activists decided to change plans.

About 30 minutes after the scheduled flag burning was supposed to begin, the group set fire to one flag at a far corner of the park away from counter protesters.

When word got out that the flag burning was underway, dozens of counter protesters, along with the NYPD, sprinted toward the scene. Emotions quickly escalated and one biker pushed a man suspected of being associated with the flag burning to the ground.

Moments later, bikers and other counter protesters chased the anti-police activists out of the park, running after them while some threatened violence.

As one woman suspected of being with the anti-police group left the park, a crowd gathered around her.

“Shame, shame, shame!” some shouted toward the woman as officers provided her with protection.

… Last Tuesday, conservative radio host Rush Limbaugh made a prediction that the American flag would “come under assault” after the Confederate flag. At the time he said, “Do not doubt me.”

It says a lot about the intelligence of these protesters that they whine about being “oppressed”, yet don’t have to fear repercussions for burning their country’s flag. Maybe they should go somewhere like, say, China and see what happens when they pull this kind of stunt.