The Atlantic Views the Eclipse Through the Lens of Critical Theory

Insights from classic literature never run out of new applications. Take this great line from Hamlet:

There are more things in heaven and earth, Horatio,
Than are dreamt of in your philosophy.

This could have applied to nothing in Shakespeare’s time more aptly than it does to modern liberalism, a cramped ideology that attempts to construct an entire worldview out of cultural Marxism, which in its core application boils down to worship of blacks and demonization of the whites who allegedly oppress them.

The more widely liberals attempt to apply this pernicious system of belief, the more obvious its absurdity. Imagine viewing the universe in all its vastness and intricacy through the cracked, foggy prism of political correctness. The Atlantic actually tries, with a brutally long piece that shoehorns today’s eclipse into the diminutive realm of critical theory:

On August 21, 2017, a total solar eclipse will arrive mid-morning on the coast of Oregon. The moon’s shadow will be about 70 miles wide, and it will race across the country faster than the speed of sound, exiting the eastern seaboard shortly before 3 p.m. local time. It has been dubbed the Great American Eclipse, and along most of its path, there live almost no black people.

The insufferably pretentious essay drags on for thousands of words, denouncing those who live in the path of the eclipse for their whiteness and political incorrectness.

It concludes as you knew it would, with a pietistic condemnation of America:

The Great American Eclipse illuminates, or darkens, a land still segregated, a land still in search of equality, a land of people still trying to dominate each other. When the lovely glow of a backlight fades, history is relentless, just one damn fact after another, one damning fact after another. America is a nation with debts that no honest man can pay. It is too much to ask that these debts simply be forgiven. But perhaps the strange path of the eclipse suggests a need for reorganization. We have figured out, more or less, how to count every person. We have not yet found a political system in which every person counts equally.

Until Big Government becomes ubiquitous enough to impose absolute equality, so that there is no such thing as excellence and no point in exerting any effort because no difference will be permitted between the best and the worst, America is a benighted land, eclipse or no eclipse. 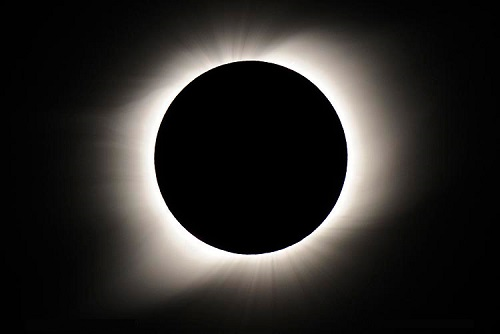 On tips from Steve T, Steve A, Dan F, Torcer, Jester, and KirklesWorth. Cross-posted at Moonbattery.