Liberals like Bernie Sanders and his wife, Jane, like to live in some kind of alternate reality where criminals being punished for their crimes is inhumane. And when Jane Sanders decided to pay a visit to Sheriff Joe Arpaio’s “Tent City”, she ended up getting a pretty big surprise. 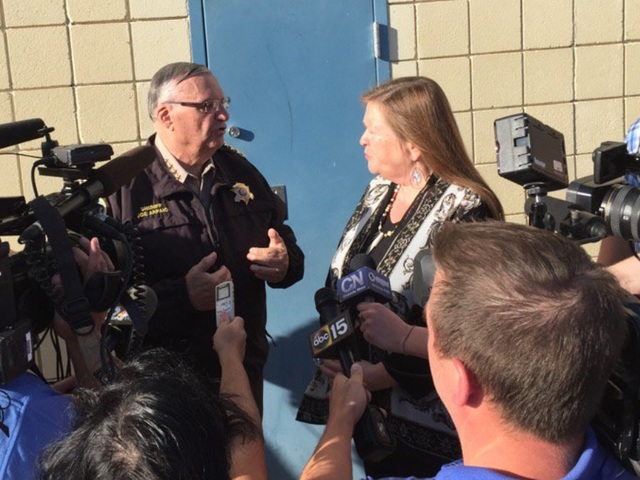 Jane Sanders, wife of Democrat presidential candidate Bernie Sanders, stopped by Maricopa County Sheriff Joe Arpaio’s Tent City Monday afternoon, probably to attempt to stir up trouble for one of our favorite conservative sheriffs. But things didn’t go as she planned after someone else decided to meet her there.

Sanders said she wanted to get a “firsthand” look at how things operated in the controversial compound.

While walking along the edge of the fence she ran into none other than Sheriff Arpaio, who was ready and willing to give her a tour of how things worked in the area, according to KTVK.

“My main mission here is to let you get a taste of Tent City,” Arpaio said.

Arpaio and Sanders walked inside Tent City and discussed how the facility operates. Sanders expressed concern that many of the inmates had not yet been convicted of any crime, but Arpaio was quick to set her straight.

“They’re all convicted, so no pre-conviction,” the sheriff said. “Nope, that’s why I like talk to you to get my side out.”

Sanders was also concerned that inmates were in the compound for being undocumented, to which Arpaio set her straight again.

“Undocumented inmates are not here for that reason,” he told her. “They’re here for other crimes.”

Sanders, a critic of Tent City and the conditions in which inmates live there, spoke with several inmates to get more of a “firsthand” account of things. One inmate told her the facility allowed him to cut the amount of his sentence in half because he is a member of a work detail.

Luis Delatore, a Tent City inmate, said he considered being there a plus.

“That’s a benefit so I mean instead of the nine months that I am doing, I am going to do four months,” he said.

You would think she’d do a little bit of research before waltzing up to Tent City and running her mouth. Instead, she just proved that she’s an uninformed idiot who had no clue what she was talking about. Way to go, Jane.