Egalitarian moonbats aspire to go beyond the tyranny of imposing equality. They want equity. This tediously overused meme makes their argument: 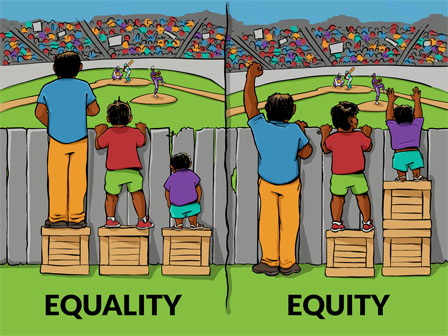 A moonbat explains how the concept will be implemented in the Harrison Bergeron dystopia they intend to inflict:

The distinction between equity and equality is an important one. For example, if we’re talking about school funding, advocating for equality would mean ensuring that all schools had the same amount of resources per pupil (an improvement in most cases, to be sure). On the other hand, advocating for equity would mean recognizing that some schools — like those serving students in low-income Communities of Color — will actually need more resources (funding, experienced teachers, relevant curriculum, etc.) if we are going to make a dent in the educational disparities that have come to be known as the “achievement gap.”

There will always be an achievement gap, because outside the bubble of leftist dogma, no two people, cultures, or races will ever be equal. This unavoidable fact is warded off with mendacious B.S.:

[The achievement gap] should actually be termed the “opportunity gap” because the problem is not in the abilities of students, but in the disparate opportunities they are afforded. It is rooted in a history of oppression, from colonization and slavery to “separate but equal” and redlining. It is sustained by systemic racism and the country’s ever-growing economic inequality.

I won’t waste much time disputing that, because anyone who would take it seriously after decades of Affirmative Action is probably unreachable. Since we have been arguing with images, let’s try this one: 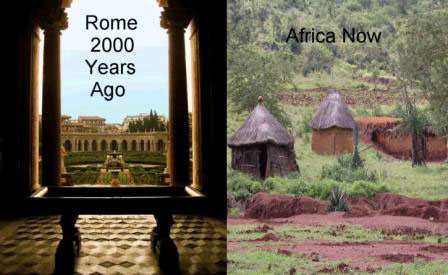 As for the ballgame graphic at the top, if I had the time, I would download the 4th Box Toolkit and make my own version. It would feature all three characters standing on the ground, staring at a high wall far over their heads. That would illustrate the smothering, redistributive state erecting barriers and destroying the incentive to make any boxes to redistribute.

On a tip from Wife of Jack S. Cross-posted at Moonbattery.