Can you spot the racist part of this picture from the White House?

This picture has been circulating the Internet as a “racist” photo, but people keep asking things like “what’s racist about it” or “what are you talking about?” It is no mistake that the picture was deemed as such by liberals and posted to mostly left wing news websites. However, the funny part is that there is actually nothing racist with the picture. The leftists were tricked[1]. They were duped. They have been fooled so hard that they’re literally stumbling over their own stupidity. The liberals have looked so bad since Trump won, that I can’t believe they haven’t had a “WTF are we thinking” moment and realized they’ve been acting like zombie sheep since the better part of (eternity) 2016.

Here’s the picture. Can you spot the racism? 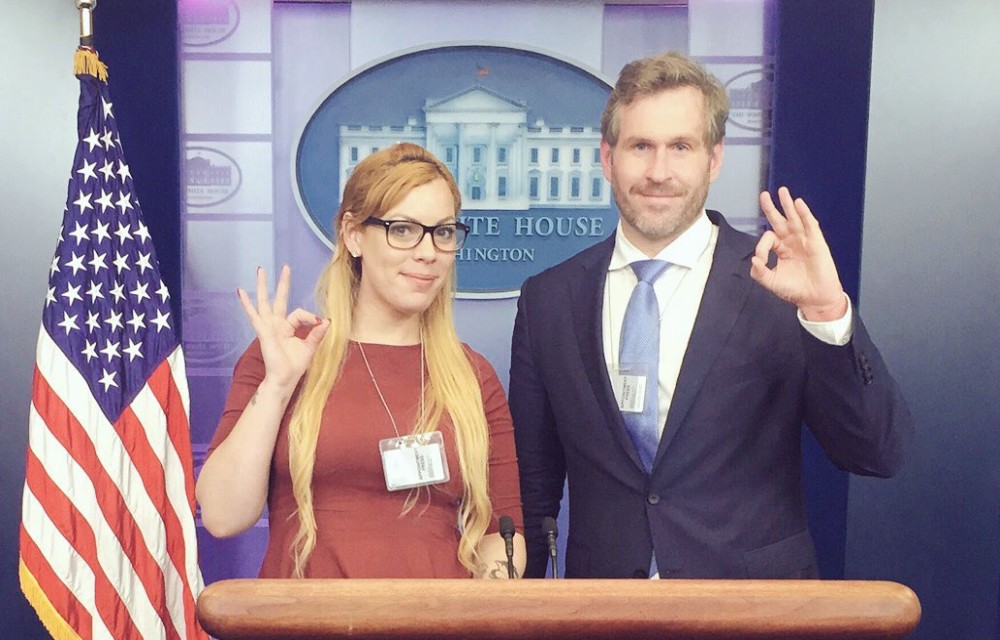 Two people at the White House. Is it because they are white? Nope. That’s not even it!

Look at this brainless buffoon’s Tweet about Cassandra Fairbanks and Mike Cernovich. It’s almost like it’s too easy to laugh at these folks. They do it to themselves. She didn’t even point out that Cernovich did his “white power” hand gesture backwards by accident. He’s going to need retraining in his faux racist hand gestures.

If you thought liberals lacked the brains to comprehend the most simple things, think for themselves, or be able to spot a hoax when one is so visibly apparent and right in front of their face – then think again. The liberals have been trolled so hard that they’ve been tricked into thinking the “OK” hand symbol is racist.

In a world where there’s seemingly nothing that liberals don’t think is racist, would it be possible to fool them into thinking that making an “OK” sign with your hand is a white supremacist symbol?

Apparently yes. When not tracking down Shia LaBeuf, the users of 4Chan started an initiative to try to convince liberals that merely making an “OK” sign is a new secret symbol being used by the Nazis among us.

Seriously? The folks at 4Chan’s /pol/ section have literally convinced liberals that the OK symbol is a racist symbol suggesting “white power” and the liberals fell for it. Liberals on social media and some left wing affiliated news sites have posted this as a racist trend that’s happening and they couldn’t possibly feel more stupid about it.

That is pure gold. The fact that you can easily convince leftists that the OK hand gesture is racist is hilariously brilliant. This is something that has been used by almost everyone on the planet at some point in their life. I wonder if the liberals were looking at themselves in the mirror thinking “OMG I’M RACIST! I DID THAT ONCE” and went into a crying fit triggered by their inability to identify their gender and the fact that they once use the “OK” symbol in third grade during recess. Can’t imagine how many triggered liberals we had when this prank fooled them into the pit of eternal stupidity.

Even better? Here’s a picture of their former President Obama and Hillary Clinton throwing up the “white power” hand sign like they’re in a gang.

What could trigger a hardcore liberal more than seeing their heroes use the fake racist hand gesture and think their world is over? Obama must be the whitest guy from Kenya. Hillary is slightly hesitant about it, but after seeing her talk down to a Black Lives Matter girl on a video, I think she’s all in on the white supremacy. Although, her poor choice of potato sack shirts costing $xx,xxx has to be addressed. Can’t have anyone in the club who dresses like that!

And here’s a news article from a publication that fell for it too!

This is an actual article on The Independent. pic.twitter.com/AQjk7o5xUD[10]

And there you have it folks, the stupidest thing you’ve read all day. If they’re smart, the liberals will buy themselves a clue with the book below. Please share this with your friends for a good laugh.