Liberal Justin Trudeau[1] won his campaign last night to become Canada’s next Prime Minister. He is the Bernie Sanders of Canada and is for drug legalization and unfettered socialism. He is very pro-Islam and pro-communism. President Obama failed[2] to take out Israeli Prime Minister Benjamin Netanyahu, but he just succeeded in taking down Canada’s Conservative Party Prime Minister Stephen Harper, a big supporter of Israel and an opponent of Russian President Vladimir Putin. It’s a story the US media did not cover. Judi McLeod of the Canada Free Press has been documenting how Obama is planning the “fundamental transformation” of Canada by taking down Harper’s government and bringing to power a progressive majority assembled from Canada’s Liberal Party and New Democratic Party (NDP), an affiliate of the Socialist International. Harper was the last true leader of the free world. 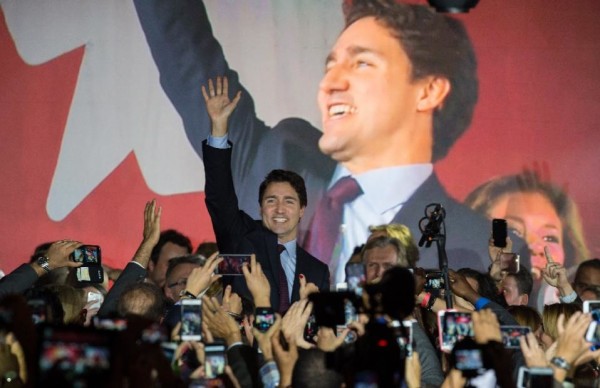 Canada voted in its first new leader in nearly a decade in a general election that handed Justin Trudeau’s Liberal party an absolute majority — and dealt a stunning blow to incumbent Prime Minister Stephen Harper.

“This is what positive politics can do,” Trudeau told supporters in Ottawa early Tuesday as the last few results trickled in.

“I didn’t make history tonight, you did.”

The victory denied a fourth term to Harper and his Conservative party. Harper has held the position since February 2006.

He conceded defeat and will resign as leader of the party, but said he’ll remain in parliament as a lawmaker.

“We put everything on the table, we gave everything we had to give and we have no regrets,” he said just before 10 p.m. Monday in Calgary (midnight ET).

“The people of Canada have elected a Liberal government, which we accept without hesitation,” Harper said.

Liberal candidates have secured 184 seats — or “ridings,” the Canadian term for federal electoral districts — putting them over the line for forming a majority government. A total of 170 seats are needed for a majority.

Her Majesty’s Loyal Opposition, as Harper’s Conservatives will now officially be designated, have 99 seats.

As the crowd chanted his name, Trudeau said the Liberals won because “we listened.”

“We beat fear with hope, we beat cynicism with hard work. We beat negative, divisive politics with a positive vision that brings Canadians together,” he said.

“Most of all we defeated the idea that Canadians should be satisfied with less, and that better isn’t possible. My friends, this is Canada, where better is always possible.”

The son of Pierre Trudeau and scion of Canada’s first, nascent political dynasty, the 43-year-old surged into the lead in recent weeks, largely on the back of anti-Conservative sentiment that saw Harper’s party lagging as Canadians went to the polls.

Before the grueling, 78-day electioneering cycle began, many dismissed the younger Trudeau as trading off of his father’s achievements and the famous family name. But pundits in Canada have praised his campaign and the way he has led the Liberals to what transpired to be a sweeping victory.

Ahead of the election, many pundits were predicting a tight race, with Harper and Trudeau neck-and-neck and the New Democratic Party (NDP) making up the numbers. Thomas Mulcair’s party holds 44 seats in the new parliament. The separatist Bloc Quebecois hold 10 and the Green Party one.

Pundits are suggesting Mulcair may step down after a poor showing at the polls, especially as the rout followed a strong, positive campaign.

The NDP suffered devastating defeats, slipping from official Opposition during the Harper government to a terrible showing on the night, with only 41 seats projected.

Mulcair was gracious in defeat. “From the very outset this election has been about change. Tonight Canadians have turned a page and reject the politics of fear and division,” he said in his concession speech in Montreal. He did not indicate if he would step down as leader.

It’s hard to believe the Canadians would fall for the false mantra of ‘Change’ that Trudeau spewed forth after eight disastrous years under the Obama regime. But they have. Our whole continent is now basically screwed.

We can expect the following from Justin Trudeau in the short term[4]:

2) Trudeau will almost immediately normalize relations with Iran and end all military operations against ISIS. here[6]

3) Trudeau will deactivate Bill C-24 that removes the citizenship Canadians who are terrorists. here[7]

5) Trudeau will give your piece of crap President another avenue to attack Israel via the G8, since Harper will no longer be there to block Obama’s anti-Israel policy. here[9]

A recent poll said that 7 out of 10 Canadians want change. Well this is the change that they will get. here[10]

The media is quick to credit the Obama Ground Team that was sent to Canada last year to rig the election for the Liberals. Members of Obama’s election team — who revolutionized data mining for political campaigns — shared it with Trudeau and the rest is now a done deal[11]. In North America, we are all truly Marxists now, who will welcome the Caliphate with open arms.