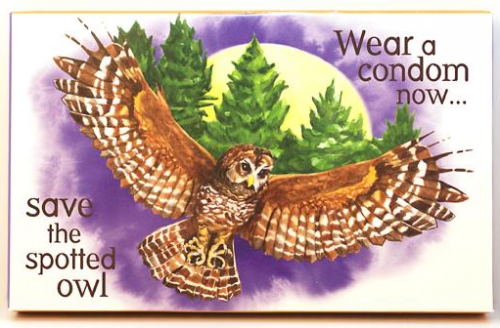 Chicago’s Lincoln Park Zoo[2] is getting into the safe sex/anti-human children game. That’s right, last Thursday, as part of their Adult Night Out program, the Leftist group, Center for Biological Diversity, gave away “hundreds” of what they called “endangered species condoms.” The Zoo is owned by the Chicago Park District and is funded largely by taxpayers. 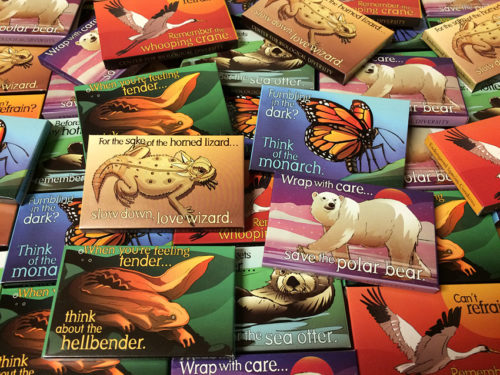 The website for the group states,”Our runaway population growth is too often ignored by the public, the media and even the environmental movement.” And they claim that the artistic and clever packaging will help raise awareness about the relationship between population growth and the survival of animals.

This group is against human babies, but all for animal babies. One package says, “Wrap with care … save the polar bear.” Another reads, “Before it gets any hotter … remember the sea otter.” And, “For the sake of the horned lizard … slow down, love wizard.”

Sarah Baillie, a CBD spokesperson, asserted that, “As our population grows, and urban sprawl and agricultural development destroy wild spaces, species we know and love pay the price. People may recognize that we’re crowding out monarch butterflies and horned lizards, but they often don’t realize that there’s a big way individuals can make a difference. Pillow Talk helps people understand how conscientious family planning can protect wildlife.”

As always, the radical Left is absolutely full of it. Human beings are as important, if not more so, than animals and bugs. We were all meant to live on this earth together: the humans, the butterflies, the hippos and the horned owls. Any plan that includes phasing out humans so animals can live is based completely in radical factless ideology. And can we imagine heading out to adult night at the zoo on a first date with that special gal or guy and being handed a horned lizard condom package? Tasteless, presumptive, obnoxious and meddlesome. These are the words that describe this idiocy.

Thanks CBD, we’ll have as many kids as we want. And we don’t want your cute little condom packs designed to make us feel bad about it. Mind your own business. And hey, if you all don’t want to reproduce, we are all in for that. We could all do with a lot fewer busybodies and Leftists.