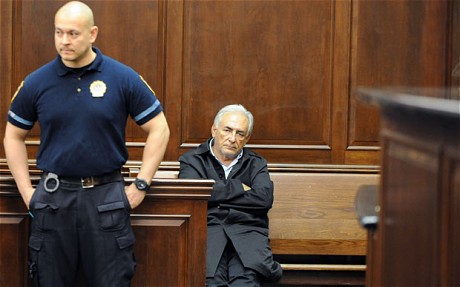 The size of her breasts, the shape of her backside, and of course, her name. These are some of the details Le Monde, the French “journal de référence,” and its subsidiary Le Post published about the woman who says IMF chief Dominique Strauss-Kahn groped her genitals and forced her to perform oral sex on him in a room at the Sofitel near Times Square.

France-Soir described the cut of her hotel maid uniform and how good she looks for a woman in her thirties, while France’s RMC radio reported that Strauss-Kahn’s attorneys were surprised by how “unattractive” she is.

And a bevy of friends and supporters rallied to the defense of Strauss-Kahn, a leading figure in the French Socialist Party, hoping to discredit his accuser lest she derail their plans for him to oust Sarkozy in the 2012 presidential elections.

A photo of the alleged victim is all over Twitter, and a Facebook profile in her supposed name was deleted shortly after links to it began to appear on blogs and social media sites. It’s unclear whether the Facebook profile was hers or a hoax account set up to smear her name. Today, another name and photo are circulating in the French media. It doesn’t matter if they get it right–the effect is the same. Just as they did to the accusers in the Julian Assange rape case[3], the “pro-woman” Left has launched a vicious campaign to terrorize and shame this woman into silence.

The despicable Bernard-Henri Lévy, author of the “Free Roman Polanski[4]” petition, called Strauss-Kahn “a friend to women” who “bears no resemblance to this monster, this caveman, this insatiable and malevolent beast.” Henri-Levy tapped into his own inner monster by assailing the accuser on his blog[5] and at the Daily Beast[6]:

I do not know–but, on the other hand, it would be nice to know, and without delay–how a chambermaid could have walked in alone, contrary to the habitual practice of most of New York’s grand hotels of sending a “cleaning brigade” of two people, into the room of one of the most closely watched figures on the planet.

“Bernard-Henri is scandalized that a mere chambermaid can get a ‘great’ man like Strauss-Kahn in trouble with the law merely by credibly accusing him of sexual assault,” writes Jonah Goldberg[7]. Decades of carefully constructed class narratives are tossed out the window in the service of the Left’s political goals. The downtrodden worker is exalted only so long as it’s convenient, only so long as she remembers her place in the power structure.

Why would someone throw away a decades long career and reputation for something they had no chance of getting away with.

Well, if the Sarko campaign offered the maid $100k, she might lie about it at the station and then disappear to live someplace else.

An accusation does not a conviction make, and I’d argue it’s important to see every angle before making some snap judgment about anyone here. Especially when political powers are involved. There’s nothing wrong with saying, “This smells fishy.” Especially when, well, it does.

Seduction, yes, but no way would he use constraint or violence. A certain number of facts, and certain aspects of the story we are hearing from the press, make this not credible.

I am convinced it is an international conspiracy … It’s not like him. Everyone knows that his weakness is seduction, women. That’s how they got him.

“Everyone knows it’s true to say that Dominique Strauss-Kahn is a hedonist (libertin), who is distinguished from others in that he doesn’t try to hide it.” The problem, wrote Savary, is American prudery. “In puritanical America, where everything is shaped by unforgiving Protestantism, they tolerate white-collar crime more than they do pleasures of the flesh.” Mind you, this is DSK’s flesh, not that of the chambermaid whom he allegedly assaulted. Maybe she was just too Protestant to enjoy M. Savary’s idea of pleasure.

[12]Even Christine Boutin, head of France’s Christian Democratic party[13] weighed in (perhaps fearing similar scandals in her own party):

I really believe that somebody set a trap for Dominique Strauss-Kahn to fall into… That he could be taken in like that seems astounding, so he must have been trapped.

And on it goes as Strauss-Kahn’s allies in the media and political world scramble to paint him as a ladies man snared by an international conspiracy, the “Great Seducer[14]” rather than a sexual predator. They will chip away at his accuser’s credibility and dignity, doing whatever it takes to rescue their anointed Socialist savior from what the New York Times called “tawdry allegations[15].” She is nothing to them when her accusations mean everything to the their political future. Strauss-Kahn’s abusive sexual history[16] and forensic evidence[17] be damned.

Socialists: for the women, for the underdog, for the worker … until one of them gets in the way.