I put up with a lot of crap from liberals on a daily basis, because it’s part of my job. You can’t be a conservative blogger without accumulating a certain amount of hate from the left.

However, I draw the line when you attack Game of Thrones. That is just not within the realm of things that I will put up with.

GoT is a work of fiction. It is meant to be nothing more than simple entertainment. Why do people have to read things into it to support their political agenda? Why do people need to ruin things? 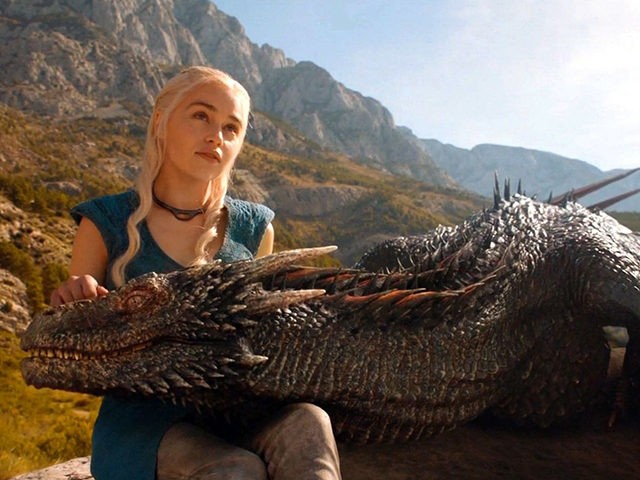 According to African-American focused website The Root[2], HBO’s wildly popular series Games of Thrones is just another cinematic depiction of white privilege. Even though dragons are just a figment of the imaginations of humans, apparently they also represent whiteness. That’s right, fictitious flying reptile birds are all that is whiteness.

Yes. A blond lady named Daenerys, who is impervious to fire, was born with the ability to ride dragons and was gifted at birth with dragon eggs that would eventually hatch. Daenerys rode the dragons (or her privilege) to save the slaves. And of course, after she frees them from lives dedicated to fighting in wars for their masters, they decide to spend their lives fighting for her—their “queen”—and help her ride her privilege dragons all the way to the Iron Throne.”

I wish I were making this up.

The Root writer Michael Harriot complains about the show, comparing the evil Lannisters to the Trump family and saying that everything is an analogy to whiteness.

Yes, they are the Lannisters, the symbol of white privilege. Everyone thinks they’re rich, but they really don’t have any money. However, no one in the Seven Kingdoms has seen their tax returns. They exist mostly by colluding with forces outside Westeros to keep their power by any means necessary. Tiffany Trump is played by Peter Dinklage, who is ostracized by the family. There are also Jamie and Cercei, twins whose lifelong love affair has produced three children who are all dead.

How terrible does your life have to be to make searching for white supremacy in every single thing a career option for you? This is just sad.

Not everything is a conspiracy against black people. Not every white person is sitting back and thinking of ways to oppress people who look differently than we do. I promise. Ease up and stop thinking of yourself as a permanent victim.