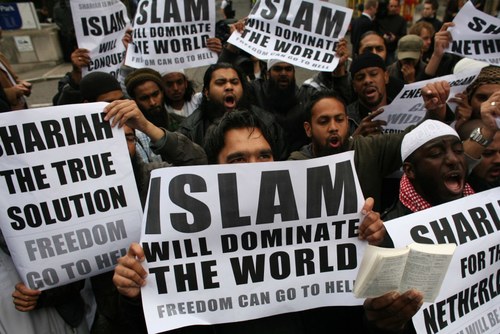 The NY Times gleefully publishes an article proposing that the travel ban is bad for all these tech companies. A few things are forgotten, with the primary being “why is it bad for companies?” Writer Carlos Tejada also forgot to ask these companies how many refugees have been hired by the companies. The answer is probably somewhere in the range of 0-2, because how many speak the language and have experience in tech?

Some of Silicon Valley’s biggest names have joined the court fight against President Trump’s immigration restrictions, as heavyweights like Apple, Google and Facebook warned that the limits could hurt the country’s economy.

In a filing to a federal appeals court dated Sunday, nearly 100 technology companies argued that Mr. Trump’s temporary ban on all visitors from seven predominantly Muslim countries would hurt their businesses and violate both immigration law and the United States Constitution. A lower court on Friday temporarily halted crucial parts of the ban, but the Trump administration said it would fight to have them reinstated.

I’m doubting they have many employees from these nations on their payrolls. As far as the Constitution goes, the federal government is tasked specifically with protecting the borders. We have every right to say who may and may not enter the country, much less come and stay. What these companies are worried about is bringing in lower wage workers to displace Americans. And bumping up their far left Progressive cred.

“The tremendous impact of immigrants on America — and on American business — is not happenstance,” the companies said in a friend-of-the-court filing. “People who choose to leave everything that is familiar and journey to an unknown land to make a new life necessarily are endowed with drive, creativity, determination — and just plain guts.”

“The energy they bring to America,” it said, “is a key reason why the American economy has been the greatest engine of prosperity and innovation in history.”

Again, they want lower wage workers, which harms Americans. And, again, how many have they hired from those nations? Heck, of the refugees overall? Or, are they concerned about women being treated like garbage by these “refugees”, along with some Allahu Akbars?

In addition to Apple, Facebook and Google, major technology names that signed the brief included Microsoft, Uber, Twitter, Airbnb, Intel and Snap, the parent of Snapchat. A few names from outside the technology field, like Levi Strauss, the jeans maker, and Chobani, a yogurt company, also signed the brief. Separately, a group of prominent Democrats also protested the ban in a court filing.

Other than squishy feelings, there is no rationale for this. The refugees from the seven countries that are hotbeds of Islamic radicalism won’t be providing workers for most of those companies, except as low paying assembly line workers and janitors, who are a threat to create problems due to their treatment of women, as we’ve seen throughout Europe. Will these companies be willing to pony up the money to support the refugees? Pay their housing, food, and clothing, along with an allowance, as is being demanded in European nations?

And it brings the question up again: why do Progressives support hardcore Islamic radicals over women and gays?