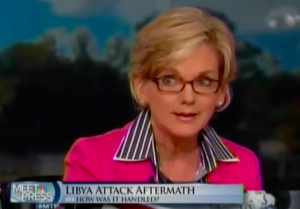 On the October 14 broadcast of Meet the Press, Jennifer Granholm, former Governor of Michigan and host of Current’s The War Room, stated that the Romney campaign is somehow not qualified to comment on the Libyan terrorist attack because they don’t know the difference between a compound and an embassy. : It’s indicative of “a lack of information.” : Oh, and they’re exploiting it for political gain.

MR. GOV. GRANHOLM::  Let’s be clear.:  First, on the attack on 9/11 that killed our ambassador and three others, the president has launched an investigation to get to the bottom of it and no one is more concerned about tracking down those killers to the end of the earth than the president is.:  The investigation and the knowledge of what’s happening is an evolving process.:  You don’t know everything on day one what you eventually find out.:  That’s why you launch an investigation.:  But what was said at the debate is not inaccurate.:  There was testimony in Congress asking for more security, but that security that was requested was for Tripoli, which is the embassy, not for Benghazi, which is 400 miles away.:  The fact that the Romney team doesn’t distinguish between an embassy and a compound, I think, is indicative of perhaps their lack of information.

FMR. GOV. GRANHOLM::  But let me just say, they have— the Romney team is politicizing this.:  They are politicizing this issue for their benefit and they are— they’ve got a lot of nerve when the Republicans in Congress actually were the ones to cut three hundred million dollars from the administration’s request for security for embassy protection.

First of all, the vote to cut the funding never “came into fruition[2].” : Second, the three hundred million dollars talking point is rendered moot by the fact that the State Department is sitting on $2 billion for embassy security. : The problem is they won’t spend it. : As Katie Pavlich at Townhall: posted yesterday[3]:

: Rep. Darrell Issa (R-Calif.) says the State Department is sitting on $2.2 billion that should be spent on upgrading security at U.S. embassies and consulates worldwide, but the Obama administration will not spend the funds.

Issa made his comment during an appearance on CBS’s “Face the Nation” to discuss the recent attack in Benghazi, Libya, that left U.S. Ambassador Chris Stevens and three other Americans dead. Issa, chairman of the House Oversight and Government Reform Committee, held a highly partisan hearing on the incident last week.

As Leah: reported: [4]over the weekend, while Benghazi lacked security despite pleads from officials on the ground for more, money was spent so officials at the U.S. Embassy in Vienna could receive Chevy Volts.

This is the second international incident where the Obama administration’s negligence has led to the deaths of American citizens. : Moreover, it’s the second time the administration tried to cover it up. : The: pervasive mangling of the facts[5]: about the attack from blaming it on a video, to saying it was the consequence of a protest, and finally saying there was: no protest[6]. But a deliberate terrorist attack is egregious in the extreme.

Granholm has trivialized the deaths of Ambassador Stevens and three others because it looks bad for the Obama administration. : It’s a perversion of the truth — and completely extraneous to the discussion at hand. : Perhaps, the consulate (or compound) could have been adequately protected if U.S. Marines weren’t so busy: defending American interests[7]: in the hostile island nation of Barbados.