HAH! Trump Protesters ANGRY Over Bill Protecting Drivers That Accidentally RUN OVER Them

The protesting method of choice over the past several years has been to block highways, preventing people from getting to their homes or their jobs. As if that wasn’t bad enough, it also prevents emergency medical personnel and first responders from reaching people in need. But sometimes, these protesters get hit by cars… and now, they might not be able to blame the driver for it anymore[1]. 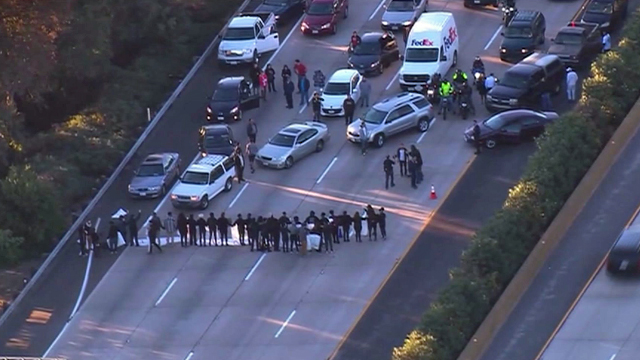 Republican state Rep. Keith Kempenich was inspired by the Dakota Access Pipeline protests and introduced HB 1203. “It’s shifting the burden of proof from the motor vehicle driver to the pedestrian,” he said. “They’re not there for the protesters. They’re (the protesters) intentionally putting themselves in danger.”

Liberals immediately jumped all over the bill, claiming it would make it legal to “murder” protesters by driving over them intentionally. But the law would only protect drivers who inadvertently hit someone. A driver who plows through a line of protesters on purpose, or hits a non-protesting pedestrian, will not be protected.

“If you stay off the roadway, this would never be an issue,” Kempenich said. “Those motorists are going about the lawful, legal exercise of their right to drive down the road… Those people didn’t ask to be in this. This bill puts the onus on somebody who’s made a conscious decision to put themselves (sic) in harm’s way. You can protest all you want, but you can’t protest up on a roadway. It’s dangerous for everybody.”

It’s one thing to protest. That is a constitutionally protected right. But you can’t risk other people’s safety in the process. If you choose to risk your life, as well as the lives of others, by protesting in the middle of the street, then you have to also be willing to accept the potential consequences. But then, liberals have never been good at that, have they?