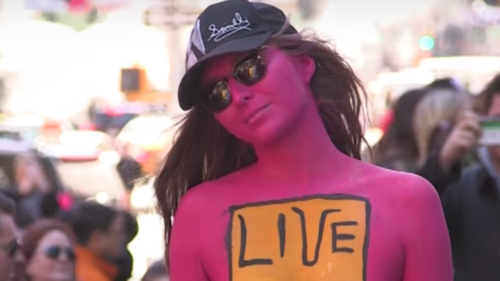 “Everyone feels that being naked[2] is such a big thing but in reality that’s just who we are.” These are the words body painting artist Andy Golub used to justify his mass public nudity event held recently in Times Square. The event included 200 nude “models” (anyone who wanted to sign up, NOT supermodels) who were naked, painted with bright colors and phrases of their own choosing. That’s right, 200 naked people lounged around in New York City in public for several hours. Here’s hoping there weren’t too many families with children heading to the M & M’s store or the Disney Store.

Defenses to indecent exposure charges in New York include:

Performance in a play, exhibition, show or entertainment (this defense is not applicable where local law prohibits such exposure).” 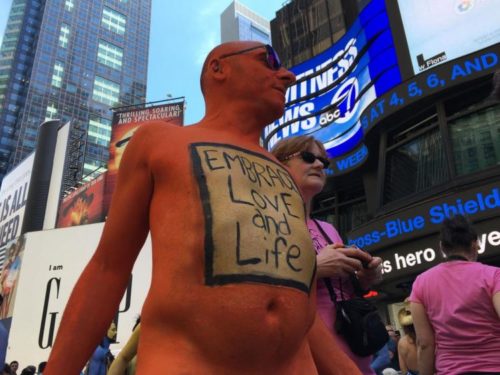 So, why do artists and performances get a pass on public street nudity? Why can people strut around buck naked for the sake of art or entertainment when the same action by someone not involved in this “art” would land them in jail? Most of us aren’t entertained by seeing people’s genitals and breasts dangling out there as we stroll past restaurants and toy stores. Even if they are covered with paint. And for people who are entertained by that, there are places they can go. But the rest of us? We just want to be able to walk around the city and see the sights, not the private parts of strangers. This is depravity on parade. The fact that these folks have convinced themselves this is okay simply illustrates how far into the gutter the culture has slipped.

One participant said this to NBC New York, “It is your inner beauty that really radiates out.” Well, if inner beauty is what’s really important, things like character, kindness, love and integrity, why do we need to see your breasts and genitalia radiating out?