When Kathy Griffin’s over-the-top vileness endangered her career, she cried for the cameras and pretended to be a victim. No one bought it. Now she has officially rescinded her supposedly heartfelt apologies. Yet she is not done playing the victim.

In June, after her infamous severed head stunt had reportedly terrified Trump’s 11-year-old son, she made a spectacle of her victimhood:

“I saw what they were doing and I went oh, okay, they’re trying to spin and they’re making it about Barron,” she said. “Obviously that was never my intent. I would never want to hurt anyone much less a child,” she added.

Yeah right. She had shrieked this earlier:

“I’m happy to deliver beat down to Donald Trump — and also to Barron. You know a lot of comics are going to go hard for Donald, my edge is that I’ll go direct for Barron.”

But for the time being, she is in self-pity mode:

Griffin then argued she had suffered enough over the incident saying she “lost everybody” meaning her celebrity friends, plus the cancellation of her comedy tour after threats to various theaters. “I mean, these Trump fans they’re hardcore,” Griffin said.

At this point, the female co-host pointed out that the liberal celebrities who criticized Griffin’s stunt weren’t doing so because they liked Trump. In other words, doesn’t the universal condemnation suggest she really did go too far? “No, you’re full of crap. Stop this,” Griffin replied.

Ideally, we should hate the moonbattery but love the moonbat. People of Kathy Griffin’s caliber don’t make it easy. 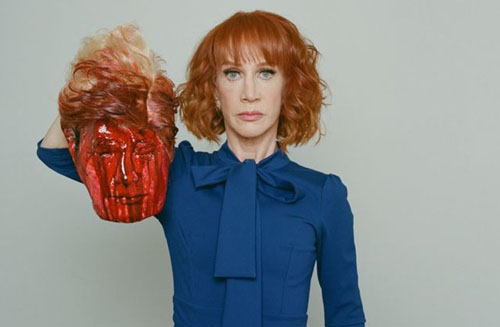 Expect more of this from Griffin.

On tips from TCS III and KirklesWorth. Cross-posted at Moonbattery.