It’s not surprising when liberals violently protest someone like Milo Yiannopoulos, who thrives on offending people and being outrageous. But liberals at Middlebury College just shut down a talk given by two people[1] unlikely to cause liberals to become unhinged: a political scientist and a college professor. 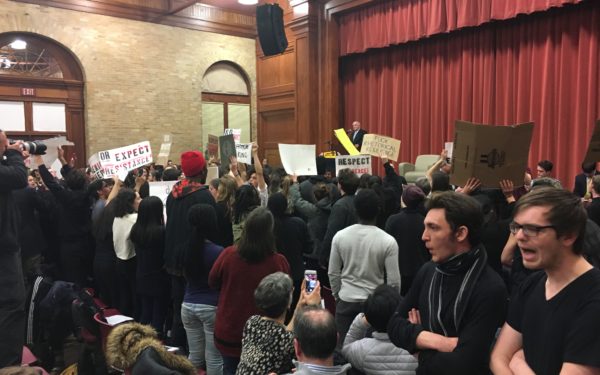 Dr. Charles Murray is a libertarian political scientist, as well as a W.H. Brady scholar at the American Enterprise Institute. He was joined by Allison Stanger, a professor of international politics and economics at the college. Rather than listening to the lecture and engaging with Murray and Stanger, protesters flooded the lecture hall carrying profanity-laden signs and screaming at the top of their lungs. The signs had things like “RESIST WHITE SUPREMACY,” “RESPECT EXISTENCE OR EXPECT RESISTANCE” and “F*** WHITE SUPREMACISTS” written on them.

The reason for the liberals to get offended? Murray’s study “The Bell Curve,” in which one chapter discusses race and intelligence.

After Murray was introduced and came onto the stage, the protesters began chanting:

Campus authorities were eventually forced to shut the event down after 20 minutes of protesting went on without stopping. Instead, organizers livestreamed the event.

After the lecture, things got even more violent. When Murray and Stanger attempted to leave, the protesters chased them, surrounded their car, jumped on it and tried to prevent them from leaving campus.

For his part, Murray praised Middlebury College officials for their actions to try to keep the peace:

Report from the front: The Middlebury administration was exemplary. The students were seriously scary.

The college, meanwhile, did not go the route other administrations have. Rather than defending the liberal protesters, they slammed them for their actions.

“We’re deeply disappointed that Charles Murray was not permitted to give his talk in the way it was intended. A large group of students took it upon themselves to disrupt the event, which forced us to move Mr. Murray and Professor Allison Stanger, the moderator of the Q&A, to another location. Thanks to some advance planning, we were able to livestream Mr. Murray’s talk and his conversation with ProfessorStanger. We will make a recording of that available as soon as possible so the members of our community who came to the event wanting to hear Mr. Murray will be able to do so.”

Murray also wrote a long letter, published in the Middlebury Campus, defending himself and his study, as well as debunking the mischaracterizations of his work. But then, when have facts ever mattered to liberals?