Looks like the EPA has been outed[1] on that massive waste water spill into the Animas River in Colorado. It has fouled water all the way to Mexico and I understand the Navajo Indians are suing over it as well. The EPA tried to cover up the name of the contracting company so no one could see what they were doing. Environmental Restoration (ER) LLC, a Missouri-based firm, was the “contractor whose work caused a mine spill in Colorado that released an estimated 3 million gallons of toxic sludge into a major river system,” the WSJ was told by a source familiar with the matter. The paper also found government documents to corroborate what their source told them. They have received $381 million in government contracts since October 2007, according to a WSJ review of data from USAspending.gov. About $364 million of that funding came from the EPA, but only $37 million was given to ER for work they had done in Colorado. I guess pre-planned environmental destruction is big bucks for the EPA now. Who knew? 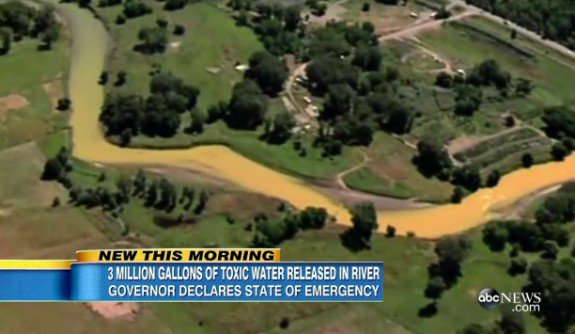 This letter to editor, posted below, was published in The Silverton Standard and The Miner[4] local newspaper, authored by a retired geologist, one week before EPA mine spill. The letter detailed verbatim, how EPA officials would foul up the Animas River on purpose in order to secure superfund money. If the Gold King mine was declared a superfund site it would essentially kill future development for the mining industry in the area. The Obama EPA is vehemently opposed to mining and development.

The EPA pushed for nearly 25 years[5], to apply its Superfund program to the Gold King mine. If a leak occurred the EPA would then receive superfund status. That is exactly what happened.

The EPA today admitted they misjudged the pressure in the gold mine[6] before the spill – just as this editorial predicted.

The letter was included in their print edition on July 30, 2015. The spill occurred one week later.

UPDATE: Via Ace of Spades[8] – The Silverton Standard[9] confirmed today this letter was indeed published a week before the EPA spill.

In a letter to the editor written a week before the spill, a retired geologist laid out exactly how the EPA would orchestrate this catastrophe and that it was guaranteed to happen. One week later and here we are with the EPA proclaiming innocence. Except there’s that letter to the editor and the contractor they hired. It looks like ER was allegedly paid to do the dirty deed and the EPA is raking in the money over it, plus they are using it as an excuse to finally shut down mining. Mining they have worked on shutting down for 25 years. Thank goodness for whistleblowers like that retired geologist. He exposed the EPA’s agenda. But will anything be done about it? I wouldn’t hold my breath.