What. An. ASS. On Fox News, host Melissa Francis got into it with former Clinton adviser Simon Rosenberg over tax reform. When all the fireworks were done, Rosenberg threw a tantrum, stormed off and said he would never appear on the show again. Good freaking riddance. He objected to Francis framing her question to ask what Democrats could change in the Trump tax plan to make it more palatable to them. And he did what Democrats do… he lied and avoided answering the question. They don’t want the estate tax done away with and claim that benefits the wealthy. Well, since the wealthy pay most of the taxes, why should they be penalized with unfair taxation? Besides, the wealthy have many ways of avoiding the death tax, so it is stupid to have it in the first place. But you can’t reason with a partisan moron.

“I don’t think that’s the issue, Melissa,” he said before being interrupted immediately by Francis. “We’re not gonna do talking points!” she exclaimed. But that was what he was intent upon, that and being condescending to Francis. Rosenberg has a ‘must be right’ complex. “It’s not talking points,” he responded, “I actually understand what they’re proposing and I don’t think Democrats are going to support a bill that dramatically cuts taxes for very wealthy people, drives up the deficit…” Who’s he kidding? They don’t give a rip about the deficit. This is an ‘eat the rich’ ploy. 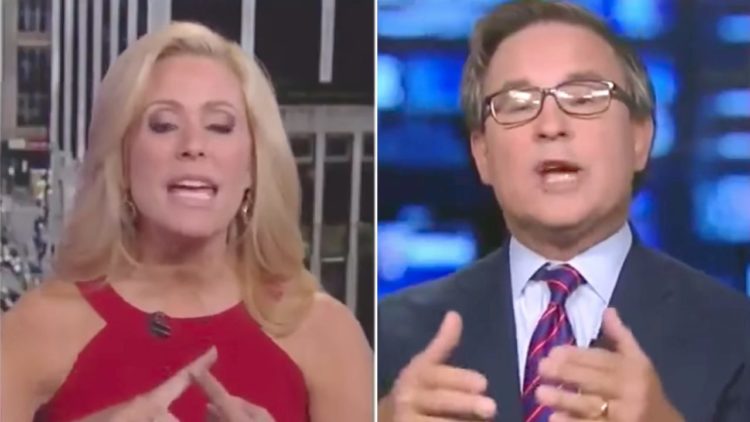 This guy is a rude, insufferable SOB. “Well you’re doing talking points,” Francis correctly pointed out. “No I’m not doing talking points,” he said, “it’s insulting that you say that to me as if I don’t actually understand what I’m saying and can do my own analysis about the economy.” “But you’re not answering the question,” she countered. “No I am answering the question,” he said, “which is Democrats are not going to support tax reform that dramatically cuts taxes on people that don’t need tax cuts, and prevents middle class people from sharing in the benefits of these tax cuts, while driving up the deficit.”

You do get how that is bull crap, right? I’m not a big fan of Trump’s tax plan, because it doesn’t cut taxes enough and doesn’t reduce the deficit. But any tax cuts he is proposing will benefit the middle class. What it boils down to is if it is from President Trump, the Dems will never support it. They are obstructionists. The two then butted heads over whether Trump’s tax plan would cut taxes for the middle class over the long term. Francis argued on the basis of a dynamic understanding of tax cuts. “Good for you, Melissa,” Rosenberg responded sarcastically.

At the end of the contentious interview, Francis said they should get a drink sometime and discuss ideas. “Melissa, don’t worry, I’m never coming back on this show again, so it doesn’t matter,” he responded, and stripped off his microphone. Classy and a typical Marxist piece of drama. This isn’t the first time Rosenberg has engaged in political theatrics. He has a habit of walking off Fox News debates when he feels he’s being treated rudely. In 2011, he angrily told conservative Ben Ferguson to “shut up,” before taking off his microphone and abandoning the debate.

It is the sign of a weak intellect and a lack of knowledge on a given subject for someone to get frustrated and angry enough to turn heel and walk away like that. Rosenberg has a limited understanding of taxes and it shows. He’s there to score political points, but when you go up against someone who actually knows what they are talking about like Francis, then all you are left with is your indignation and ignorance showing. To Melissa Francis… never extend a peace offering to a Marxist. They bite the hand that offers it.