It’s no secret that liberals are not a fan of the Trump administration’s illegal immigration crackdown. But some are taking their opposition way too far — like liberal Zeke Cohen, who appeared on Tucker Carlson’s show and called immigration officers Nazis[1]. Whoops. 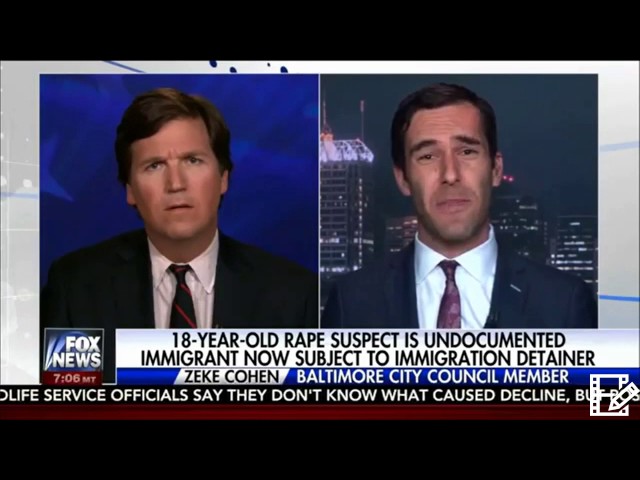 Zeke Cohen is a member of the Baltimore City Council and last week, he sponsored a resolution demanding federal authorities cease immigration enforcement in Baltimore. Tucker Carlson, meanwhile, slammed the rape of a 14 year-old girl by two illegal immigrants as “the sign of a sick civilization at war with itself.” While Cohen agreed there was no place for sexual violence, he still opposed ICE arrests of illegal immigrants.

So far, it seems like this was a fairly civil disagreement — but it got ugly fast. Cohen had compared ICE officials to Nazis in the past and Carlson asked him if he still stood by that comparison. “They’re enforcing laws that would have prevented this heinous crime, would you say that to the parents of this girl who was raped?” Carlson asked. “These are Nazis, these Americans who are enforcing immigration laws. Why would you say something like that?”

Cohen began by saying that he extends “sympathy to these parents. What they have been through is horrific.” But then he just doubled down on his ignorance. “To trot their crime out publicly is really kind of shameful, Tucker,” he continued. “The politics you’re engaging in is this Willy Horton style race baiting, umm, dog whistle, where we don’t blame entire groups of people for the heinous acts of a few.”

But Tucker Carlson wasn’t about to let Cohen get off so easy. “Hold on. I beg your pardon, Zeke. Slow down,” he said. “I’m not saying that all Hispanics are terrorists. I’m not saying anything like that. You’re the one who explicitly compared fed. immigration authorities to Nazis. Who’s using the dog whistle here? Who’s making demagogic statements? They’re Nazis? You’re calling fellow American citizens Nazis for enforcing federal law passed by Congress?”

Watch the entire interview below:

It isn’t surprising to find that people did not take kindly to Cohen’s comments.

There is much that can be said about illegal immigration crackdowns. A constructive conversation can be had and not everyone will agree. Whether ICE’s crackdown is the best course of action can be debated. But calling immigration officials Nazis is ludicrous and it’s clearly not meant to foster dialogue in any way. If Cohen wants to actually get to solving problems, he should maybe stop the flamethrowing — it’s not going to get him anywhere.