Liberals fancy themselves as “tolerant” and “accepting” of everyone who isn’t a straight, white, Christian male.

That is, until they are faced with the reality of their actions. Then things get a little bit complicated.

Like when this mommy blogger went to Disneyland and found out the hard way that conservatives weren’t kidding when we said that all-gender bathrooms were going to be trouble for women. 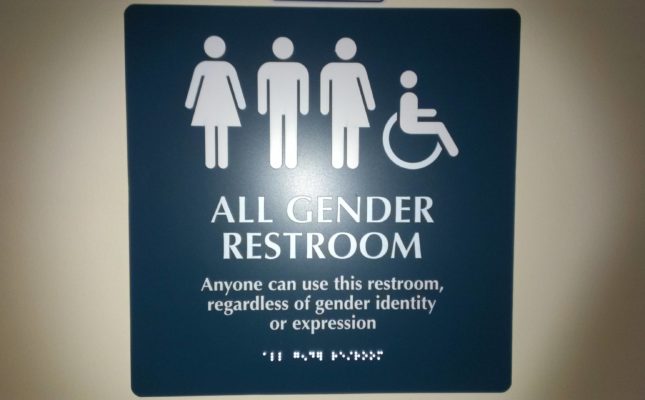 Kristen Quintrall Lavin runs “The Get Real Mom” and has advocated for “everyone being who they want to be,” even when it comes to using whichever restroom they please.

She went into the women’s room when a ““very large, burly man in a Lakers Jersey” walked in behind her. Instead of actually using the bathroom like every lady in there, he merely leaned up against the wall and watched the terrified women go about their business[2].

She wrote that the man eventually started walking past each stall. “You know, the stalls that have 1 inch gaps by all the door hinges so you can most definitely see everyone with their pants around their ankles.” His perversion had been given a license, and every single woman in that restroom felt powerless to challenge him.

Lavin notes that the women refused to say anything out of fear of being politically incorrect.

“This notion that we’re shamed into silence b/c we might offend someone, has gone too far. There was a man in the bathroom. Not transgender. There was a man who felt entitled to be in the woman restroom, because he knew no one would say anything,” she wrote.

“There were 20-25 people by the time I left, who were scared and uncomfortable by his ominous presence. And the only thing stopping us, was our fear of political correctness and that the media has told us we don’t know what gender is anymore,” Lavin astutely stated. […]

Gee, it’s almost like there was a group of people who said that things like this were going to happen if “transgender rights” were passed.