Protesting and liberalism go hand-in-hand, but the protesters aren’t always the smartest people out there. Take the new tactic used by liberals in the past few years: standing in the middle of crowded highways to stop traffic. It’s dangerous, but they keep doing it. Except when G-20 protesters in Hamburg, Germany tried blocking a street, they inadvertently blocked a government vehicle[1] — and it did not end well. 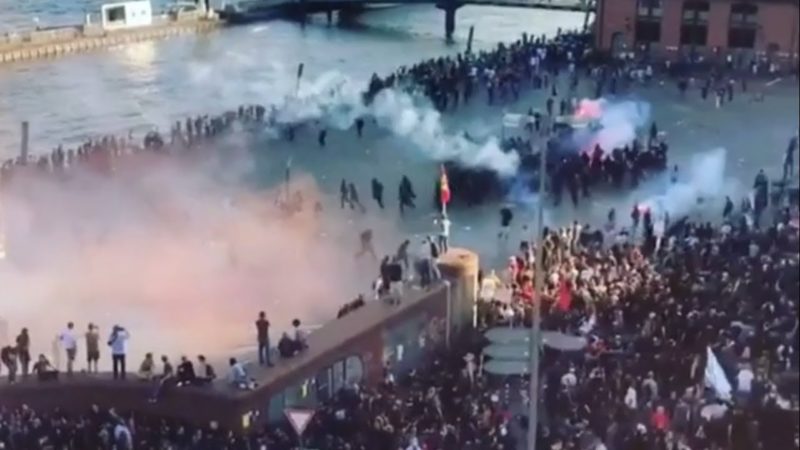 This year’s G-20 summit has been marred by violent protests, but the security teams there to protect the diplomats in attendance were not playing around.

One group of protesters were standing in the middle of the street, intentionally blocking traffic. They didn’t realize that the car they were blocking was a government vehicle, though. And the driver wasn’t having any of their foolishness. After waiting a minute or so for the protesters to disperse, the driver got fed up and plowed right on through them.

Of course, the protesters reacted angrily, shouting and screaming as the car drove through them. But it begs the question: what do they honestly expect to happen when they’re standing in the middle of a street, blocking traffic? It seems fairly common sense to expect that you might possibly get struck by one of the vehicles that you’re blocking.

This wasn’t the only example of insane protests at the G-20 summit. Protesters went head-to-head with riot police as well, with protesters throwing bottles, firecrackers and smoke bombs, and police responding with water cannons. It’s estimated that over 75 police officers were injured in the protests.

While protesters claimed that there would be over 100,000 of them there, the reality was quite different. Somehwere between 8,000 and 10,000 protesters showed up, but that was still enough to do quite a bit of damage, as the protesters set fires, smashed windows and attacked police.

What do you think should happen to these protesters?