Have you heard of Based Stickman? If you haven’t, it is about time you get to know the guy…

Allow me to introduce you…[1]

That folks, is Based Stickman. He also goes by the name Kyle Chapman and it was he who was walking around Berkeley recently and on his person he was carrying a big American flag over his shoulder. Why? Well, he was promoting for a free speech rally of course! 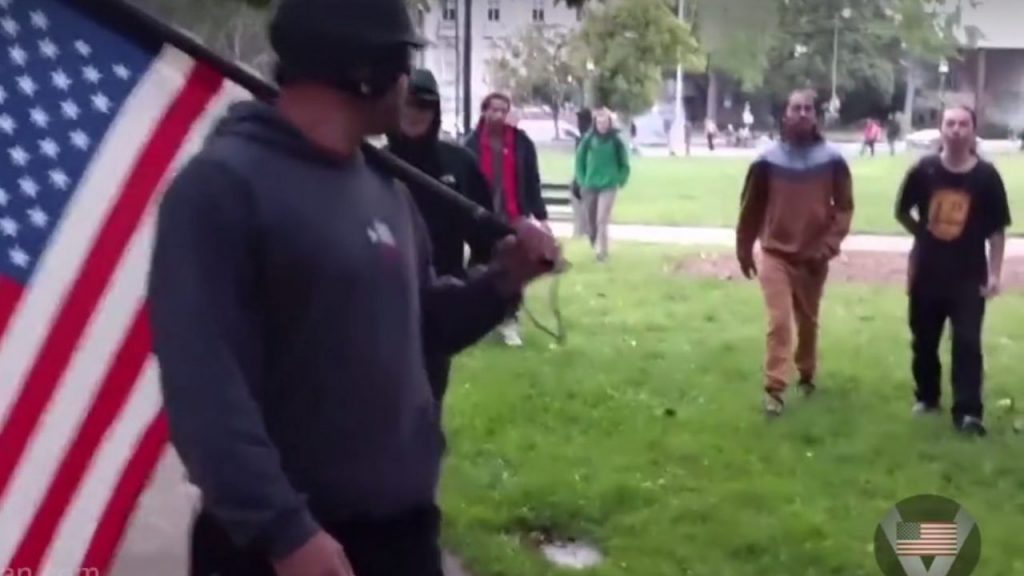 So, during his stroll around campus, you can bet there were some butt hurt liberals that couldn’t help but start to trigger uncontrollably. Some of them even had the audacity to approach Stickman, to tell him he’s a horrible person for carrying the flag.

The American flag…the flag that represents the country they live in. The country that allows them to be pricks if they want to, but doesn’t allow them to get away with it…

Here is some dialogue, in case you didn’t catch all the action that went down in the video.

“You gonna pull out a knife, too?” one man is heard asking Chapman.

“I don’t wanna see y’all around here again,” another tells Chapman as the gang closes in on him in the middle of Berkeley’s Civic Center Park.

Then BOOM! One of them walks straight up to Chapman and begins yelling in his face, asking… no… CHALLENGING Chapman to a fight. The aggressor, must not have expected Chapman to accept the invitation because Chapman turned around to face them and seconds later, the liberal scumbag who started it all was on the ground.

Violence is not the answer. However, if the left is going to use violence as their way to do what they want, they better expect that those they bully are going to fight back. Period.

Chapman was simply walking with a flag…and they started to harass him. Their bad.

Here’s what Chapman said on Facebook about it all.

**BREAKING**
We had a little run-in with local thugs while shooting our April 15th Freedom Rally promo video at Civic Center park. They tried to surround us while we were leaving…Nothing a little chin check couldn’t fix!

They called the cops like pussies. I spent most of the night in jail, racked up another charge. My boys were waiting for me when I was released.

It was a great day!

This is another example of left-wing thugs trying to intimidate and threaten real Americans when we try to exercise our First Amendment rights. We CANNOT let that fly. #FightBack #WeAreAllBased

Free speech, means free speech. The left and their stupid selves are so desperate to shut it down, when and always if there is a conservative involved in the situation. Real jerks.

Liberal intolerance, is not okay. Sometimes, what a bully needs most is a good beating themselves.