After watching this, I almost don’t even know what to say. This woman seems to be able to dish it out really well, but when it comes time to take what she gives…she’s going to scream assault. Her name is Heather Franklin of Portland, OR and she filmed herself while confronting employees of a rug store. 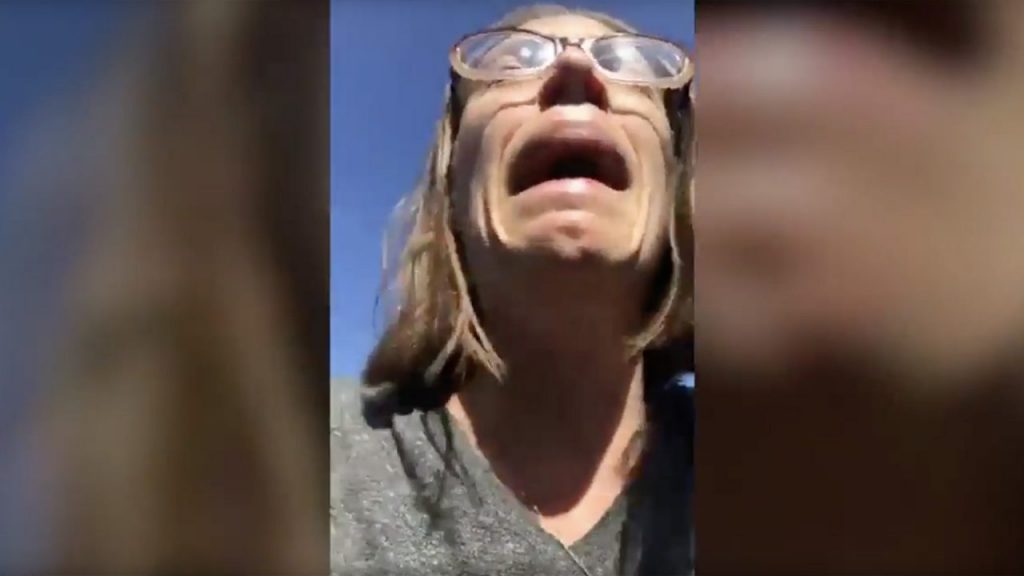 The reason for this was because her feelings were hurt after seeing that they had Confederate flags hanging for sale on their store’s wall[2].

“You don’t care about having hate flags on your wall?” Franklin said, approaching store employees as she filmed. “It’s a symbol of slavery, it’s like having a Swastika on your wall.”

A man at this point that Franklin was harassing with her video camera and taunting then started to respond to her carrying on and told the woman she needed to learn her history, completely denying that the Confederate flag – which was a rug in this case – was a symbol of hate.

“How is that a hate symbol?” he asked. “You should read your history.”

Then one of the employees of the store gave Franklin the birdy when she started to film him and said “Bye, B****,” then asked her whether she’d been a Hillary Clinton or Bernie Sanders supporter.

“Which one did you vote for that lost?” the employee asked. “Is that why you’re in a bad mood?”

Franklin answered that yes, she was in a bad mood and it was because they had a hate symbol on the wall of a place she liked to do her shopping at and it offended her. She was asked to leave the store shortly after that, but continued to film her ranting out into the parking lot until things went further south.

As she filmed, two of the men she spoke with in the store also exited and when she saw them, she began screaming, “Let me leave! Don’t come any closer!”

On the video, Franklin can be heard saying that she was trying to leave and insinuated that the men were preventing her doing so. However, the men never actually approached her — according to her video — despite her pleas for them to leave her alone.

When another woman in the parking lot approached Franklin to see if she required assistance, Franklin insisted that one of the men attacked her in the store.

Of course there was no attack caught on camera in or out of the store, so that’s a lie. When this story hit the newsline it went VIRAL and you’re going to see why in just a moment. Since this video came out, the CEO of the store has removed the rugs and placed the two employees involved on leave.

That CEO’s name is Andrew Toolson. He basically apologized for having the rugs in his store and gave a coward’s answer as to why they did in the first place. It was their supplier’s fault, not theirs and they have all been removed since. There was a protest scheduled to happen outside this store located in liberal Portland and he also welcomed that because it was their right to do so. After he was finished with his apology, he also stated that the two employees involved were wrong and will be let go for it.

So, what does that teach people folks? It teaches them that they are allowed to disrupt a place of business with their own personal feelings and make a scene, and the businesses they are hurting can do nothing to protect themselves.

Sigh… here you go, watch it all here.

In John Hawkins’ new book, ‘101 Things All Young Adults Should Know’, he teaches in number 85 of the book, “You are not a victim” ….can someone get that memo to her please? She went from 0 to 100 ranting and raving over a the design on a rug in a store. She could have simply told herself she was not going to shop there anymore and written a letter to management to file her complaint. But now, she wanted everyone to know that her feelings were hurt and take a stand in the name of being butt-hurt over an inanimate object. You are not a victim lady, you are a drama queen.