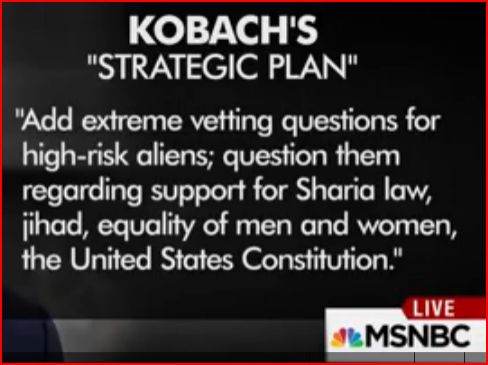 The potential pick of Chris Kobach for head of DHS has sent Liberals into apoplexy, starting with Christopher Hayes, on his very low rated show. The entire 8 minute video is worth a listen as to how Liberals have hissy fits over the notion that non-citizens from countries known to have Islamic extremism should be, get this, vetted. The Kobach point starts at 1:41, but, especially relevant at 2:50

Kansas Secretary of State Kris Kobach has already laid out his plan for overhauling of the nation’s immigration system, and it includes many of president-elect Donald Trump’s most prominent — and controversial — campaign priorities, including reinstating an immigrant tracking system and questioning “high risk” immigrants about their views on Sharia law and jihad. (snip)

Kobach’s plan for DHS also echoes Trump’s campaign-trail pledges in his proposal to “add extreme vetting questions for high-risk aliens — question them regarding Sharia Law, jihad, equality of men and women, the United States Constitution,” as well as plans to reduce the number of Syrian refugees accepted into the U.S. to zero.

I fail to see the problem. We vet the heck out of people applying for citizenship regardless of where they come from. The US should have control over people who want to enter this nation. You’d think, from all their Vagina Whispering, that liberals would be for policies that keep people who treat women as 2nd class citizens out.

It includes one key departure from the Obama Administration’s policy on immigration enforcement — the portion of the document visible in the picture seems to suggest he would redefine “criminal alien” as “any alien arrested for any crime, and any gang member,” a vastly expanded definition that could result in any undocumented immigrant arrested for any reason — but not convicted — being deported.

What’s the problem? Oh, right, Liberal World. Nor where these two alone. The LA Times[3], Huffington Post[4], ABC News[5], Politico[6], Daily Beast[7], and so many others are Very Concerned, and the Leftist Muslim extremist supporters in the comments are freaking out.

Trump should threaten to send all the potential Islamic extremists to the fancy and high toned neighborhoods stocked with Democrat big wigs, see how they respond.