Liberals UNHINGED – One Attacks GOP Congressman, Other Runs One Off The ROAD! [VIDEO]

Just wow.[1] I think anyone with more than two brain cells out there can figure out that these town halls where there is such outrage from the so-called people, are astroturfed events ginned up by leftist organizations to cause chaos, unrest and violence. The latest one just occurred in North Dakota. The left is getting ever more unrestrained and violent and they are using these town halls as an excuse. These aren’t ordinary citizens… they are radicals posing as them.

Republican Congressman Kevin Cramer held a town hall where he was physically attacked by a protester who said they were angry over the Republicans repealing Obamacare and giving breaks to the wealthy… all bull crap. But the local media reporting it, stated it just that way. The guy grabbed Cramer by the collar and stuffed money down his shirt. He was then removed by police… he should have been thrown in jail for assault. 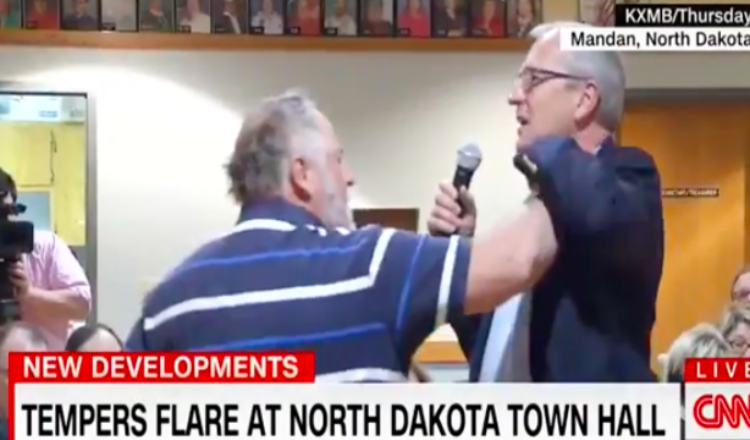 Democrats have been ratcheting up the crazy at Republican town halls.

As we’ve reported before, many of the people at these events are organized to come out by Democrats to make it appear that the ‘grassroots’ are upset.

But the continual effort to stoke the chaos is making people more and more unrestrained.

Check out this video of a ‘protester’ getting physical with Congressman Kevin Cramer in North Dakota.

The man was yelling at Rep. Cramer, “Will the rich benefit from, if the health care is destroyed, do the rich get a tax break? Yes or no?” He then shoved cash into the congressman’s collar, saying, “There you go, take it.”

Cramer responded, “That’s too far,” and police escorted the man from the meeting.

CNN’s anchor Poppy Harlow’s description? Not that this man is crazy or that he shouldn’t be doing this. It’s how this man is showing his “disgust with the Congressman’s support of tax cuts for the wealthy.”

What? That’s a Democratic talking point, not a fact or an excuse for getting physical with a congressman.

And under the category of ‘unhinged’, the next one is even worse and more dangerous. Tennessee Rep. David Kustoff was leaving a town hall with an aide when they were attacked and run off the road. A woman was accused of chasing Kustoff in her car and then screaming at him after she allegedly became upset over his vote to repeal and replace Obamacare, police told BuzzFeed[4] News on Friday. Wendi L. Wright, 35, was arrested and charged with felony reckless endangerment for the incident that occurred in Weakley County on Monday.

Things are getting very dangerous out there and the left is orchestrating it. They want it to get deadly in fact. Wright allegedly followed their car on a highway and placed them “in fear of being forced off” the road, according to the Weakley County Sheriff’s Department. When Kustoff and his party arrived at the location they were going to, Wright got out of her car, went to their car, screamed, hit the windows and tried to reach into the car. She then stood in from of their car and tried to prevent them from moving. She was still screeching… someone called 911 and she left before the police got there. However, they tracked her down. She’s seriously disturbed. This woman is just the kind of useful idiot the left loves and uses. If this keeps up, somebody is going to get killed.