There is nothing liberals hate more than an outspoken, confident, attractive conservative woman — it’s probably too emasculating for them — and Holly Fisher checked all of those boxes. So clearly, she had to not only be mocked herself, but have death threats wished upon her baby. But being that Fisher is a conservative and not a whiny liberal, she took it in stride. 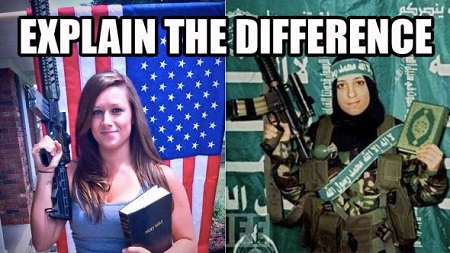 Her retort — a representation of the nation’s First Amendment and Second Amendment Rights — was not well-received by the left. In response, the left did what it always does — developed a specious meme that conflated her views with those of a Hamas terrorist.

As Fox & Friends pointed out during her appearance, she even received a tweet wishing death upon her infant child, who has a birth defect.

… In her Fox & Friends appearance, Holly Fisher comes across as a thoughtful, well-spoken woman, and not the hateful rube the left made her out to be. That should be the end of the “Jihad Barbie” smear.

Women are supposed to be abortion-obsessed liberals who care about nothing more than sex, subsidized birth control, and plentiful ways of murdering their unborn children, so women like Fisher who challenge that orthodoxy must be destroyed in their minds. It really just goes to show how weak liberals truly are, that they are so threatened by one conservative woman who is willing to proudly speak her mind.