MSNBC’s Harris-Perry: Hey, The Boston Bombers Being Muslim Is Not Relevant

Yes, the same lady who thinks your kids aren’t yours, and should be fully handed over to The State. 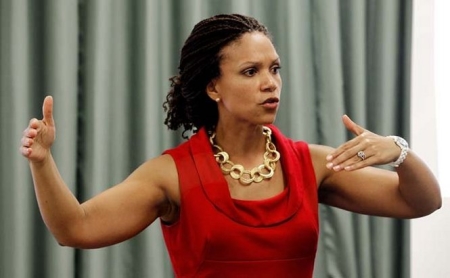 (Mediaite[2]) Making the point that the Tsarnaev brothers’ Muslim faith at the moment bears little relevance to the investigation into the brothers’ decision to attack the Boston Marathon last week, MSNBC host Melissa Harris-Perry observed that Tsarnaev’s faith is about as relevant to the investigation right now as are Ben Affleck movies about violent events in Boston. Her panel guests agreed and added that Americans have to “otherize” violent actors in order to absolve themselves from responsibility for or connection to their violence.

But Progressives were extremely hot to trot to paint all Conservatives with a broad brush when the bombings first happened, just like they’ve done time and time again, blaming the whole for the actions of a few or one (even when we eventually learn that the perpetrator had little to nothing to do with Conservatism, and often more to do with Left side politics). Progressives mostly seem incapable of realizing that there is a set who practice Islam that are radicalized, that are violent, that want to destroy Western culture, especially Israel, Britain, and The United States. That intentionally target civilians. They want to spread the hard-core version of Islam. This is not “Islamophobia”, it’s a plain truth. Had the two brothers been, say, Romney voters or members of the NRA or the TEA Party, we would be hearing non-stop from people like Harris-Perry about how evil Conservatives as a whole are. Perhaps we could term this “Conservaphobia”.

Now, do we know what motivated the two? Not fully. But we can certainly take some educated guesses based on the material available, which points at the two being radicalized Muslims, which those who discuss this issue refer to as “Islamists”, in order to separate them from those Muslims who aren’t raging nutjobs practicing the hard-core version. Right now there have been over 20,700[3] deadly terrorist attacks by these Islamists since 9/11/2001.

The Powerline guys wonder why evil makes liberals stupid[4], and end with

When asserting the obvious is not a respectable option, asserting gibberish becomes the option of choice for people of ordinary intellect who wish to opine. And these days, the market for such gibberish is booming.

A big question revolves around whether liberals are stupid or become stupid. Are they espousing these views because they are dogmatic idiots or because they intentionally act stupid? We saw, in the immediate aftermath, liberals talking about last Monday being tax day and Patriot’s Day, trying to make connections to people on the political Right in a manner to blame all on the Right. When it became clear that they were Muslims, and apparently the Islamist version, that there were links to other jihadis, and all the other information, liberals started forming ways to avoid linking them to Islam, and more specifically Islamists.