What is it about July 4th that brings out the worst in Liberals? For a party that says they are “progressive” and future looking, they sure seem to focus on all the bad that has occurred, and whine and whine and whine. The Washington Post features not one, not two, but three negative pieces (in fairness, they have a few positive pieces, but why bother with the negative on this day?). First, here’s the Editorial Board[1] whining about the Declaration of Independence. 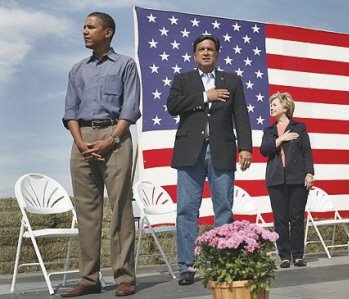 “WE HOLD THESE truths to be sacred and undeniable,” Thomas Jefferson wrote[3] in his first draft of the Declaration of Independence[4] (the composition of which was regarded as something of a minor administrative chore, as noted by the historian Joseph Ellis[5]). He showed the draft to John Adams and Benjamin Franklin, who suggested “self-evident” instead – perhaps a polite way of saying to the British crown: “as any fool can plainly see.” Although Jefferson (uncharacteristically) accepted the change without complaint, the “truths” that all men are created equal and endowed with certain unalienable rights were not self-evident to everyone, even in the American colonies, where a sizable part of the population was loyal to Great Britain and a great many more simply wanted the revolutionary turmoil to end so things could get back to normal.

The obvious contradiction of the Declaration’s fine sentiments – the institution of slavery – had to be swept under the rug in 1776 lest southerners withdraw from the fragile and sometimes fractious coalition that was forming behind the idea of independence….

Last week, the Aspen Institute gathered a politically diverse group of Americans under the banner of the “Franklin Project[7],” named after Ben, to declare a commitment to offering every American between the ages of 18 and 28 a chance to give a year of service to the country. The opportunities would include service in our armed forces but also time spent educating our fellow citizens, bringing them health care and preventive services, working with the least advantaged among us, and conserving our environment.

Yes, he does mean the military, in terms of Lefties joining in order to liberalize the institution. Add in the far left service stuff. And here’s the kicker: The American Revolution Was a Flop[8]

The easiest way of assessing whether the United States would have been better off without its revolution is to look at those English-speaking countries that rejected the American Revolution and retained the monarchy, particularly Canada, which experienced an influx of American refugees after the British defeat. The U.S. performance should also be assessed against the ideals the new country set for itself – namely, advancing life, liberty and the pursuit of happiness.

Lot’s of whines about slavery, which the writer, a Canadian, acknowledges was defeated during the Civil War. Complaints about citizens being incarcerated (no mention that liberal justice system policies makes this worse). Whines about this, whines about that.

Which brings us to the related matter of the revolution’s long-term impact on politics. While the Canadian, Australian and British governments have shown they can get things done, including passing tough austerity budgets in recent years, the norm in Washington has become paralyzing partisanship and gridlock.

In these senses, the American Revolution was a flop. Perhaps it’s time for Americans to accept that their revolution was a failure and renounce it. (For their part, many Russians have.)

I’ll resist the notion to smack this Canuck around while insulting Canada: it’s not Canada’s fault that the WP published this drivel for Independence Day.

Many other papers have pulled the same thing, negative articles and op-eds. Kudos to the NY Times for avoiding this (except for one[9] linking slavery to the American Revolution.) Here’s their Editorial Board[10]

There is something self-evident about the Fourth of July. We know its origin and its meaning. Its iconography is straightforward, even if the text behind it – the Declaration – is complex. It retains a simplicity that resembles no other major holiday. It celebrates a vital principle, but it is lacking in rites and ritual. We set aside the day, which seems to include a bit of everything – family, patriotism, parades, and simply doing nothing. Yet you could say its significance can be found in the doings of any ordinary American day – something that’s all too easy to forget until July Fourth comes along as a reminder.

I’m going to avoid what the loonies at the Left wing blogs say, however, if you want the most loony tunes piece[11], here you go

That’s why I’ll do no flag waving or banner display. I’ll recite no Pledges of Allegiance, nor stand for the Star Spangled Banner. Patriotic speeches and other jingoistic claptrap will draw no applause from me.

There’s so much loony (in some cases, wrapped around real issues) in the piece that I couldn’t even figure out what to excerpt, so I simply went with the the above. Whines about Vietnam, complaints about America in 3rd world countries, drones, rendition, Dick Cheney, Bush, the 2000 Election, and so much more (but never mentions Obama by name) from Mike Rivage-Seul, who is a liberation theologian (read: far far left moonbat), who, really, just put into words what so many Liberals think. Yet, he’s still here living in the United States, a country he seems to hate. Much like other Lefties, who never seem to leave the country they despise.

Want to piss a liberal off today? Wave the flag