College students are often the most idiotic brainwashed liberal morons in our society, thanks in large part to the indoctrination served up by their liberal professors living in an ivory tower. Still, seeing them be so stupid as to sign a petition supporting ISIS on September 11 is enraging — until a veteran is asked to sign, and serves a glorious smackdown of the liberal lunatics. 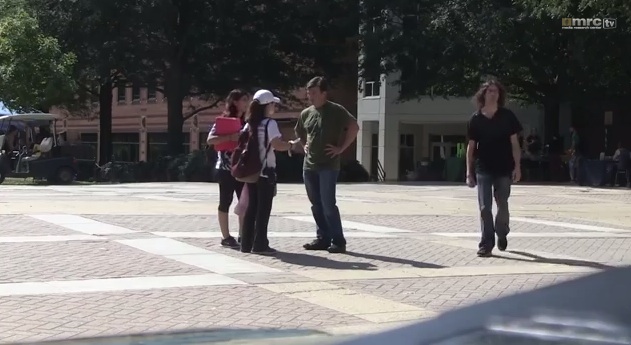 “We are supporting ISIS today. We are telling President Obama to support the fighters of the Islamic State of Iraq and Syria — do not bomb them,” Joseph told students in a new video released on Monday.

“They are just like us, only with slightly more beheadings,” he later told another student.

At one point in the video, a female student claims that American journalist Steven Sotloff, who was beheaded by Islamic State militants, was actually with the Mossad, an important Israeli intelligence agency. The same student is heard telling Joseph not to get her “started” on what Christians used to do to nonbelievers.

“Every religion has its moment,” she said, seemingly downplaying radical Islam.

… One military veteran was having none of it. When Joseph asked him how he knew that Islamic State terrorists wouldn’t “be nicer” if the U.S. supported them instead of bombing them, the veteran said such a thing will never happen.

“How do you think we’ve gotten so many signatures?” Joseph asked.

“Because people are (expletive),” the military veteran responded. “And they don’t watch the news, and they vote uneducated — that’s why.”

It’s especially offensive considering that these morons would blindly support an Islamic terrorist group on the anniversary of a day that saw almost 3,000 innocent people murdered by Islamic terrorists. Thank God for our veterans — they may be the only people that can save this country now.