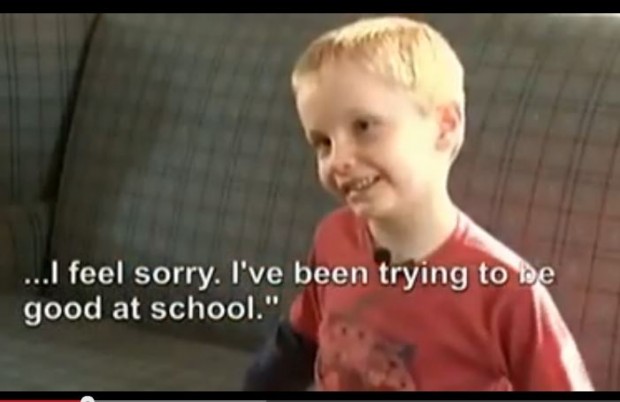 (KRDO[2]) A six year old boy is suspended from school in Canon City for kissing a classmate on the cheek.

His mother says it’s a crush and the two children like each other. But the school is calling it something else; sexual harassment.

First grader, Hunter Yelton, told us he loves science and phys-ed. Also…that he has a crush on a girl at school, who likes him back.

It may sound innocent enough…but at six years old Hunter now has ‘sexual harassment’ on his school record.

He kissed her on the hand.

“They sent me to the office, fair and square. I did something wrong and I feel sorry,” (Hunter) said.

Should a 6 year old really feel remorse over a kiss on the hand? Should he feel that he did something wrong? The girl had no problem with the kiss.

“She was fine with it, they are ‘boyfriend and girlfriend’. The other children saw it and went to the music teacher. That was the day I had the meeting with the principal, where she first said ‘sexual harassment’. This is taking it to an extreme that doesn’t need to be met with a six year old. Now my son is asking questions… what is sex mommy? That should not ever be said, sex. Not in a sentence with a six year old,” said Hunters’ mom, Jennifer Saunders.

First, are we teaching kids to be complete snitches for things? Remember, kids snitched on a 10 year old who mimicked an imaginary bow and arrow[3] (for which he was suspended and the parents are considering legal action). 2nd, this will go on Hunter’s record. Sexual harassment. How can it be SH when the girl had no problem with the kiss? 3rd, Progressives have been hot to trot to teach All About Sex to kids as young as kindergarten. Yet, now they have problems with a kiss.

The school is hoping the suspension will change Hunter’s behavior. He’s been caught kissing the same girl on the cheek and rough housing. Because 6 year olds are never wild and crazy.