Here we go. Another ungrateful Hollywood bag of ignorance walking around acting a fool over a whole lot of bull crap he’s creating all on his own to be raging over…. 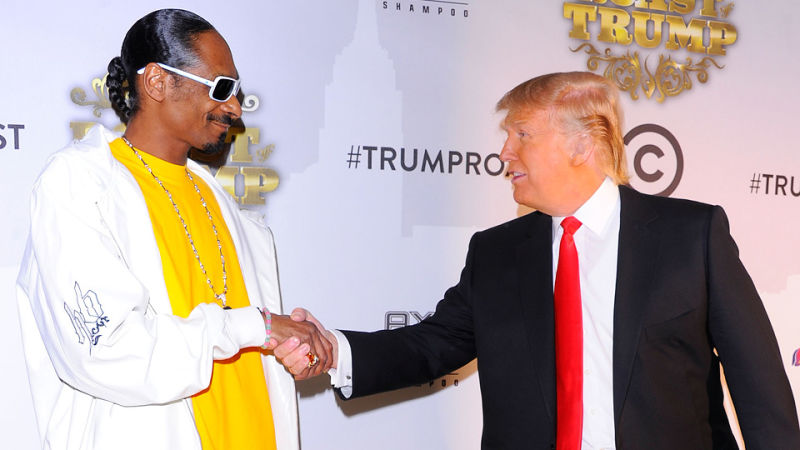 Fun Fact: Snoop Dogg sure has one hell of a handshake. WEAK!

Done with the brainless left continually crying about Trump is racist like they are in some kind of movement to save the world from some Hitler character.

Their dramatics only remind me of the kid in the playground who trips on his own feet, falls on his face, then blames someone else…because everyone was looking and they were embarrassed. After awhile, he starts believing that lie himself…and his anger and frustration takes on a whole new form that has the playground divided…some looking for an invisible troublemaker who tripped the LYING crying kid. Then some…who were too clever to believe the garbage lie in the first place who are now being called HATERS and BULLIES…because they don’t react and don’t jump to the liar’s rescue.

Poor Trump…is the fall guy in this case and the group of kids who refuse to react to the lie? Well, of course that would be us.

Now it’s rapper Snoop Dogg who is trying to throw down where it’s completely unnecessary…and it’s just making him look like a punk.

He is threatening any black entertainer who performs at Trump’s inauguration stating that he will ‘roast’ anyone of them that try to ‘betray’ the color of their skin.

In a YouTube video peppered with profanities and racial epithets, Snoop dismissed entertainers who perform as an “Uncle Tom-assed n*****:

Oh but…it gets worse. Hard to believe… I know.

“Which one of you (racial epithet) going to do it first? Ise be the one that perform for you, suh.”

But it wasn’t too long ago that Snoop ‘praised’ the President-elect at a televised ‘roast’:

“Donald says he wants to run for president and move on into the White House. Why not? It wouldn’t be the first time you pushed a black family out of their home.”

“On the real, though. Donald you know I have some love for you. From one pimp to another: much respect, keep banking that scrilla, and after the show, come by my dressing room…and I can get you so high, that you’ll fire yourself and put my name on the m****rf***ing towers.”

Just after the election, Snoop did another live video expressing his disbelief that Donald Trump had won — he had thrown his support behind Democrat Hillary Clinton — and blaming “weak-a**” Tim Kaine for her loss. He indicated that she should have chosen Bernie as her running mate.

However, Snoop also noted that he planned to give Donald Trump a chance, looking directly at the camera and addressing the President-elect directly: “give it a shot, give him a chance, see what he gonna do. Trump, you’re on the clock.”

Go smoke another one ‘bruh’, let the grown-ups handle this one.