College campuses have become enclaves of liberal thinking, where students can be insulated from ever having to be confronted with an opposing view or a disagreement. So, it’s no wonder that these coddled babies lose their minds when they see something they don’t like… like, say, a Trump sign[1]. 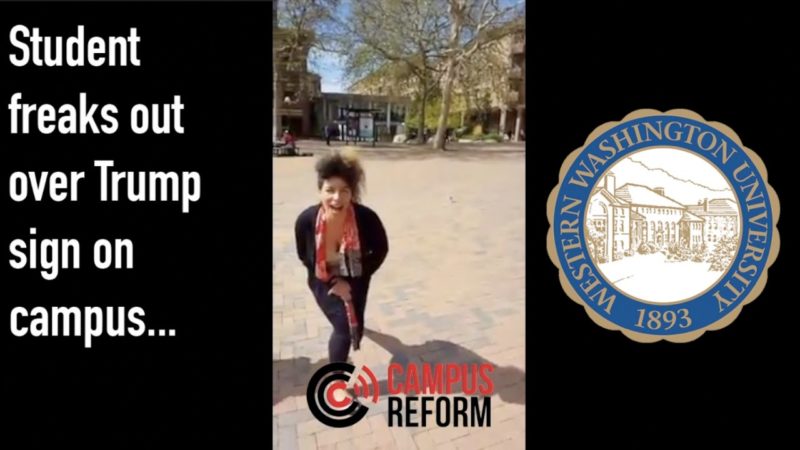 An unnamed student at Washington University became completely unhinged when she saw a protester holding a Trump sign. The sign read, “Trump, borders, laws, jobs, liberty” on one side and “Jesus judges you, repent or perish” on the other. When the woman saw it, she went into full-meltdown mode. The student, believed to be an art major, tossed paint on the ground while she screamed repeatedly.

Her temper tantrum was so insane that even people walking by stopped to ask her if she was all right. She screams that she’s an art major, possibly trying to insinuate that her tantrum is some kind of performance. When an administrator intervenes, she responds by saying, “Call the police, bitch!”

The person holding the sign is a “street preacher” named Eric Bostrom, who can be heard giving a running commentary on the video. “Right here on the Western Washington campus, she’s going nuts with a Trump sign—she doesn’t like the Trump sign. She’s anti-Trump,” Bostrom said. He also joked about her mental status, saying, “This is what happens when you don’t take your meds.”

The question is, how will students like this woman handle living in the real world? There’s literally nowhere else but college campuses where people can be coddled and babied and protected from dumb, offensive or opposing viewpoints, and it seems clear that many of these people cannot handle it… at all.