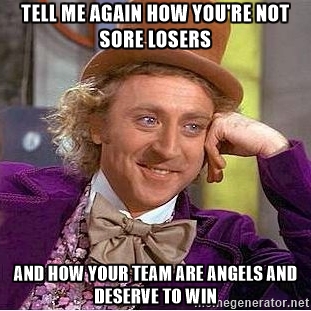 It’s now official, at least as far as the Electoral College certifying their votes[2] (hilariously, of the 7 who did not hold faith, most switched their vote away from Hillary), that Donald Trump is the president elect. After all the caterwauling and machinations from the mostly Democratic Party sore losers, which came after all the calls for Trump and his people to respect and honor the election outcome, Democrats lost again. So, we get a bit of Sore Loser Symphony from the NY Times Editorial Board (among others)

Time to End the Electoral College[3]

By overwhelming majorities[4], Americans would prefer to elect the president by direct popular vote, not filtered through the antiquated mechanism[5] of the Electoral College. They understand, on a gut level, the basic fairness of awarding the nation’s highest office on the same basis as every other elected office — to the person who gets the most votes.

Which goes to show that our education system on the Constitution and the way our federal republic works is horrendous.

But for now, the presidency is still decided by 538 electors[6]. And on Monday, despite much [7]talk in recent weeks[8] about urging those electors to block Donald Trump from the White House, a majority did as expected and cast their ballots for him[9] — a result Congress will ratify next month.

And so for the second time in 16 years, the candidate who lost the popular vote has won the presidency. Unlike 2000, it wasn’t even close. Hillary Clinton beat Mr. Trump by more than 2.8 million votes, or 2.1 percent of the electorate. That’s a wider margin than 10 winning candidates enjoyed and the biggest deficit for an incoming president since the 19th century[10].

Yes, Mr. Trump won under the rules, but the rules should change so that a presidential election reflects the will of Americans and promotes a more participatory democracy.

Le sigh. Does it really need pointing out that we don’t have a democracy, we have a federal republic, and we have it for a reason? That the system was set up because states are big, many of them bigger than the European nations most people had come from at the time? I won’t provide links: anyone who doesn’t understand needs to reflect on just how their schools failed them.

The Electoral College, which is written into the Constitution, is more than just a vestige of the founding era; it is a living symbol[11] of America’s original sin. When slavery was the law of the land, a direct popular vote would have disadvantaged the Southern states, with their large disenfranchised populations. Counting those men and women as three-fifths of a white person, as the Constitution originally did[12], gave the slave states more electoral votes.

There’s so much either incompetence and lack of knowledge or willful misunderstanding, it would be hard to know where to fisk it. So, why bother? These people are sore losers, and have reverted to their raaaaacism theme, which is a typical sign that a Democrat really has no adult argument.

The Sore Loser Symphony continues on for a few more paragraphs, but, Democrats should remember, things do not always turn out the way they expect them to. It looks great on paper, then, say, Republicans in Democrat states which almost never vote Republican realize that their votes actually matter, and they get out and vote for the GOP instead of voting 3rd party, not voting President, or just staying home.

You know, though, if the situation was reverse the NY Times and other Sore Losers would be telling us how prescient and awesome the Framers were in setting up this system.