The Left’s Bleeding of ALEC

For over a year, the political left has waged a vicious and effective campaign to dissolve the American Legislative Exchange Council. : Twenty-five companies have already cut ties with ALEC and liberal groups are keeping the pressure on the organization through shame campaigns and other forms of extortion. : As reported by CJ Ciaramella of the Washington Free Beacon[2]: on July 17, various arms of the institutional left gathered in Arlington, Va last Thursday for a forum about this “shady” organization. : However, the focal point of their strategy can be found in the letter by Color of Change Executive Director Rashad Robinson back in June. 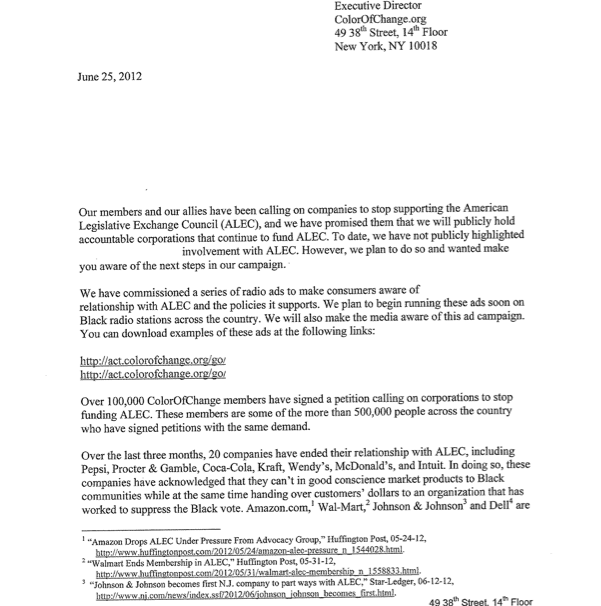 Courtesy of Washington Free Beacon and Color of Change 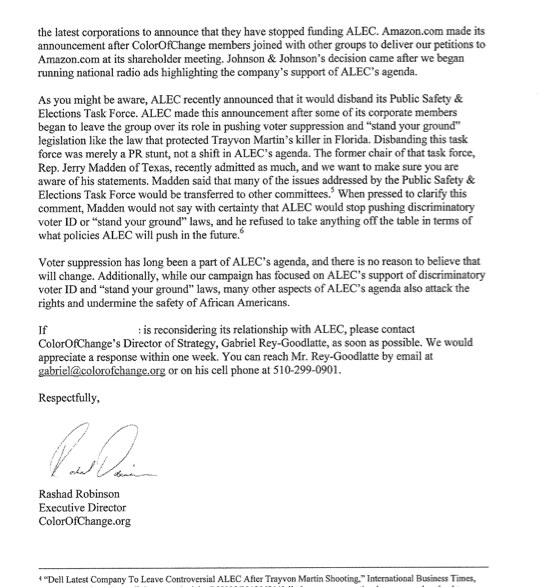 Courtesy of Washington Free Beacon and Color of Change

“We have commissioned a series of radio ads to make consumers aware of [your] relationship with ALEC and the policies it supports,” Robinson continues. “We plan to begin running these ads soon on Black radio stations across the country. We will also make the media aware of this ad campaign.”

“If [redacted] is reconsidering its relationship with ALEC, please contact Color of Change’s Director of Strategy, Gabriel Rey-Goodlatte, as soon as possible,” Robinson warns. “We would appreciate a response within one week.”

Obviously, if the client is in retail, they will run for the hills and so this campaign of intimidation in tough economic times is working and conservatives seem to be silent on the matter. : However, Mr. Rey-Goodlatte may have a criminal history. Ciaramella wrote that:

Rey-Goodlatte was arrested in 2001 for buying merchandise with counterfeit $20 bills, according to news reports. The Jones lieutenant, then 18, was charged with three felony counts of first-degree criminal possession of a forged substance and misdemeanor counts of petty larceny, the: Poughkeepsie Journal: reported at the time.

When reached on his cell phone and asked if the news report was true, Rey-Goodlatte said, “No,” and then announced he was heading into a meeting and hung up.: Color of Change did not return numerous requests for comment about its funders or its campaign against ALEC.

In all, the left’s goal is to “to make ALEC toxic to be a part of,” which was stated by “Diallo Brooks, the director of field mobilization for People for the American Way, told the crowd at the town hall-style forum. Brooks was explaining his organization and its allies’ strategy to dismantle the private-public partnership of state legislators and businesses that works to advance free-market legislation.” : Because free markets are so evil, they only brought close to 400 million people into the middle class in China.

Nonetheless, this magical mystery tour included the usual suspects, like the AFL-CIO whose:

: State government-relations director Naomi Walker [stated] ALEC’s goal is no less than to “destroy our democracy.”

[Other] groups represented… included the National Education Association, Common Cause, ProgressVA, and the AFL-CIO. Several former and current progressive Virginia lawmakers also were on hand.

“Anyone who comes to you and says, ‘We have a great new innovative idea,’ stop and question it,” said Kim Anderson, the advocacy director for the National Education Association. “Because I guarantee they’re not interested in equity and equal access for every kid in America.”

“ALEC’s mechanics are second grade arithmetic,” NEA vice-president: Lily Eskelsen[5]: said at the Netroots Nation panel. “Deregulate, defund, and privatize.”: While Color of Change works to harass ALEC’s corporate sponsors, Common Cause has been leading the fight on the legal front.The non-profit group, which presents itself as a strictly non-partisan organization, has filed an IRS whistleblower complaint against ALEC, challenging the group’s tax-exempt status and accusing it of lobbying activities. It has also filed requests with more than 45 state attorneys general to investigate ALEC.: Common Cause’s president, Bob Edgar, is a former Democratic congressman. The law firm working with Common Cause in its complaint, Phillips & Cohen, also has a long history of donating generously to Democrats.

With regards to Kim Anderson, teachers unions are interested only in teachers unions so cool it with the rhetoric about your organization’s commitment to students and their education. : In addition, I’m not going to listen to policy prescriptions from socio-economic cartels that inevitably fail in the end. : As the left continues its death by a thousand cuts strategy to destroy ALEC, I feel conservatives could be doing more to save this great organization. However, Ben Howe’s video from May shows that grassroots efforts against ALEC are small, but the media, in driving the narrative, has scared companies into bolting from the council.