It is an experience to read through the Occupy Wall Street picture page[1], where people tell their stories of woe that explain why they’re protesting.

Why is it an experience? Because not just a few of them, but MOST OF THEM are either people with nothing to complain about, people who created their own problems, or people whose big beef really just seems to be that life is hard.

All of these pics (and I could have picked more out) are from the very first page of the Tumblr. 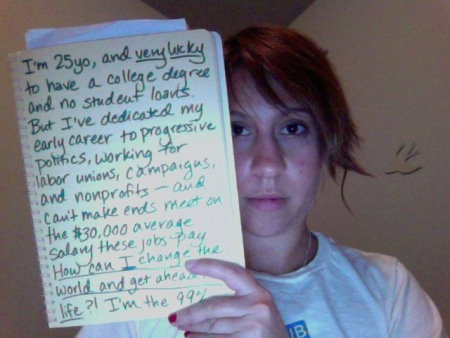 If your big complaint is that you’re in your twenties and not making a lot of money yet, then you’re a crybaby. If I remember correctly, when I was 25 years old, the job market was crummy, like it is now, and I think I was putting my psychology degree to work at Wal-Mart portrait studios, where I was getting paid roughly $17,000 a year. If you can’t get by on $30,000 a year at 25, stop complaining and go get a second job. 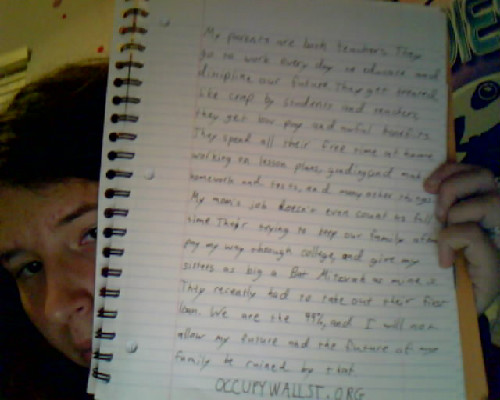 My parents are both teachers. They go to work every day to educate and discipline our future. They get treated like crap by students and teachers, they get low pay and awful benefits. They spend all their free time at home working on lesson plans, grading and making homework and tests, and many other things. My mom’s job doesn’t even count as full time. Their trying to keep our family afloat, pay my way through college, and give my sisters as big a Bat Mitzvah as mine was. They recently had to take out their first loan. We are the 99%, and I will not allow my future and the future of my family to be ruined by that. OCCUPYWALLST.ORG

Setting aside the fact that teachers with experience aren’t actually undercompensated given the amount of work that they do, is there anyone alive who hasn’t heard teachers complain about how much money they make? It’s impossible to miss because they NEVER stop talking about it. So, if both of your parents chose to get into a profession like that and they’re not rolling in dough, whose fault is it really? Maybe they should quit their jobs and try to get employed on Wall Street if that’s such a path to easy riches. Also, your sister isn’t getting a Bat Mitzvah that’s as big as yours was? Wow, call those kids in Africa who are starving to death and tell them how tough you’ve got it. 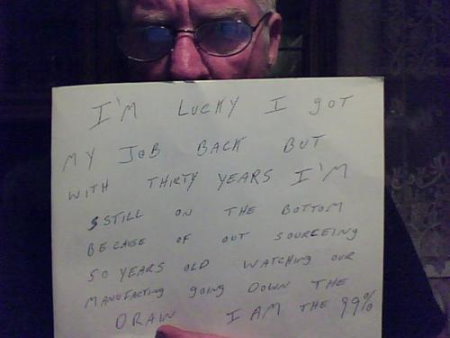 He’s a little vague, but the general idea here seems to be that this guy has worked in manufacturing for 30 years, he’s still on the bottom of the pile, and he blames outsourcing. Here’s an alternate explantion: Maybe he just sucks at his job. If this guy isn’t terrible at his job, then the mystery would be, “Why has he stayed somewhere for 30 years that hasn’t rewarded him for excellence?” 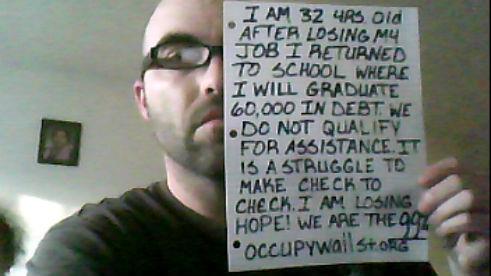 You’re 32 years old, jobless, and you chose to run up $60,000 in student loan debt. Either you’re going to graduate with a degree that will allow you to earn a lot of money and pay the debt back or, you made a big mistake when you went back to school in the first place. Either way, that doesn’t have anything to do with Wall Street, the rich, or anyone else.