Tabitha Hale is a friend of mine. Has been for a long time. She’s also not very tall or threatening as you can see from this picture from CPAC, 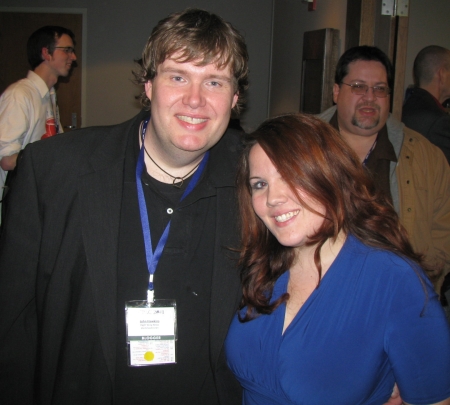 Well, today, on the heels of Congressman Michael Capuano of Massachusetts[1] telling unions, “Every once and awhile you need to get out on the streets and get a little bloody when necessary”, union thugs were protesting at Freedomworks[2].

Here’s Tabitha[3] explaining what happened next,

I was taking pictures and video with my phone, and I heard my coworker getting into a heated exchange with one of the protesters. I turned on my iPhone camera and headed over to film it. They were going back and forth, the protester called my colleague a “little sh*t” just as I walked up, which is where the video starts. Then he noticed I was filming. Here’s what happened:

Basically, it’s ridiculous. I’m a 5’1 female in a dress, and he was standing up on a garden wall above me in the courtyard. He hardly felt threatened. I was stunned, because generally protesters are there to, you know, get their message out. They don’t normally shy away from the camera.

I’m very much okay, and very appreciative of the support from my fellow bloggers and activists today. I am, however, shaken up by the level of sheer hatred I experienced today. The look of fury on his face in the close up is appalling. I had not exchanged a word with him. He didn’t know who I was. He didn’t even know my name, what I do. He had probably surmised that I was with FreedomWorks and that was enough.

Had a Tea Partier done this to a liberal, conservatives would be falling all over themselves to condemn his actions while the story would be getting major play in the mainstream media. After all, it’s perfect: An attractive young girl attacked by a thug for no reason whatsover and the entire thing is on video. So, will Rachel Maddow have this on her show tonight? Will there be an editorial in the Washington Post demanding that Democrats encourage their union supporters to tone down the violence? Will liberal bloggers condemn this? You already know the answer, but who knows? Maybe they’ll surprise us.

Additionally, we need is ask: Is this an example of a union member acting like we’ve come to expect union members to act or is it just the misogyny of liberal men on display? I tend to think it’s the latter, in part because this video is the mirror image of another incident that occurred back in 2008. In that case, it involved my friend Skye from Midnight Blue Says[4]. As you’ll notice from this pic of her at CPAC, she’s about as terrifying as a baby Panda, 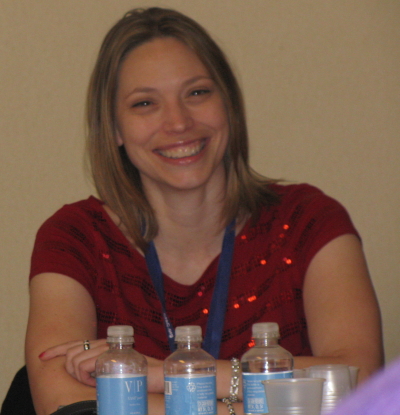 So, what happened with her? Basically, the same thing. A liberal anti-war protester was going back and forth with someone else, she was filming, and the thug attacked her.

Why do that if she’s non-threatening? That’s just it: she IS non-threatening and more importantly, she’s a conservative woman. In the mind of a liberal, that means she must be asking for it. Plus, no liberal man ever has to fear the wrath of the Daily Kos[5] or Firedoglake[6] for assaulting a conservative woman. Worst case scenario, if it gets a lot of attention, they might tut-tut a bit to try to hide the fact that they’re okay with violence as long as it’s aimed at the Right.

In Skye’s case, she filed charges against the liberal thug who attacked her and she won[7]:

The anti-war protester that slapped her and was subsequently arrested was John H. Meicht and as a quick update on that particular case, the man signed a plea agreement in front of Magisterial District Judge Gwenn Knapp, agreeing to write a formal letter of apology to the blogger, complete 30 hours of community service and stay out of trouble for the next 60 days.
According to the plea deal, if he does what is required of him, the charges of assault, resisting arrest, harassment, recklessly endangering another person and related charges with be withdrawn by the district attorney’s office.

Hopefully, Tabitha will file charges, too. The only thing that keeps liberal punks like these two from engaging in violence against conservative women is fear of the consequences. The more legal trouble they get into, the better, and the more likely it is that other conservative women won’t be attacked by liberal men who’re picking the easiest target they can find so they can “get a little bloody when necessary.”

PS: Ever notice that the mainstream media gets far more upset about a conservative using words like “job killing” than it does about actual violence committed by liberals?

PS #2: The first person to ask Michael Capuano whether he supports this assault on Tabitha or whether he feels like the union thug should have kept going until he drew blood wins the Internet.