I didn’t think it could get any worse[1] than David Letterman. Guess I was wrong. Stephen Colbert beats him hands down. He’s not funny and he’s so politically biased, it’s painful. On “The Late Show” he went on a six-minute screed against The Donald. Even going so far as to put Trump’s pic up with a pic of the KKK burning a cross into a lawn. Yeah, that’s a real knee-slapper Stephen. He doesn’t know history at all – it was the Dems who founded the KKK and it was their official party arm in Dixie. He also didn’t swipe at Sanders or Clinton. But the real cherry on top, was having the Joyful Tortoise, Jeb Bush on. I would rather be drawn and quartered than watch that happy crap. 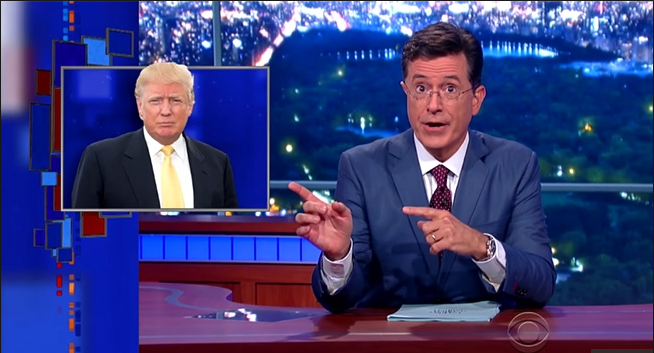 On Tuesday, Stephen Colbert[3] made the transition from a fake conservative pundit to an equally fake late night talk show host. This time, though, he’s actually trying to be real, taking over for David Letterman on “The Late Show” at CBS.

On Colbert’s first show, the host spent six minutes simply bashing Donald Trump[4], including a jaw-droppingly inappropriate bit where he put the 2016 Republican front-runner’s visage on screen at the same time as a picture of Klansmen burning a cross.

Not only was the stunt in profoundly poor taste, it was also erroneous — the KKK was founded by Democrats and for many years acted as an official party arm in Dixie.

Whatever the case, America was turned off by the stunt, and they showed it by turning their TVs off. Colbert had a strong 4.9 rating on his first night on the air, but that dipped to a 3.2 estimated overnight rating for his Wednesday show, a drop of more than 35 percent.

The numbers were virtually identical to NBC’s “Tonight Show with Jimmy Fallon[5],” in spite of the fact that Fallon is hardly new to the job. Even Chevy Chase thinks those numbers are bad.

In addition, Colbert only got a 0.8 in the coveted 18-49 demographic, down almost 50 percent from his first night’s 1.5 rating in the same group.

Believe it or not, Colbert’s KKK faux pas wasn’t the only thing that the host did to outrage conservatives. Colbert also devoted no time to jokes about Hillary Clinton[6] and Bernie Sanders — in spite of the fact that seems like rather low-hanging fruit — and also had former Florida Gov. Jeb Bush on as one of his first guests (H/TBreitbart[7]).

Apparently, Americans wondering if the glib spokesman of the facile left had changed his methods got their answer Tuesday night and decided they didn’t need to watch again.

Oh well. This is what happens when you mess with Trump. I’m sure there’s a spot available after Conan O’Brien on TBS when you bomb for good, Stephen.

Colbert should stick to pistachio ads. At least those were somewhat entertaining. I don’t think I’ve ever seen anything else he’s done that was even fleetingly amusing. Just sayin’. Colbert had a 35% drop in ratings from his first night to his second night over this stunt. Guess where they all went? Over to watch Jimmy Fallon, who had Trump as a guest. He arguably did one of the funniest skits with Trump I have ever seen. Sucks to be Colbert. As Trump loves to point out, those who attack him are doomed. Colbert was over before he began. No big loss.