Tucker Carlson has made schooling milennnials a bit of a specialty by now. Millennials have been losing their minds on college campuses every other week over their perceived outrage of the moment. The latest example is liberal snowflakes at the University of Chicago protesting a speech by Donald Trump. Jake Bittle, one of the organizers of the protest, appeared on Carlson’s show and he promptly got smacked down[1]. 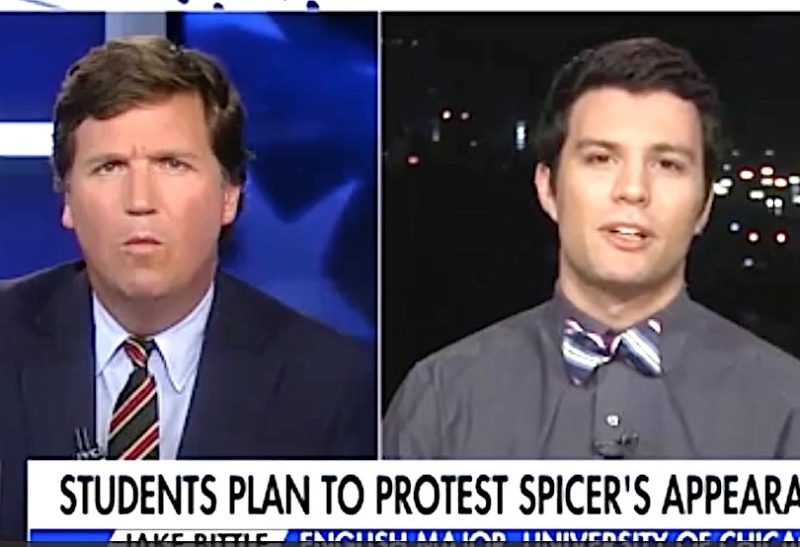 According to Bittle, the students are in “crisis.” He explained:

Now, we are faced with a real crisis with the election of term. We must take real action, the Ivy League translation of the vulgar give Trump a chance. Real action, human, donating money to the ACLU, to Standing Rock, Planned Parenthood, call your representatives, protest, flipping cars when Trump walks away from the Paris Climate Agreement, attacking racists, attacking people in the supermarket, whatever it takes.

Carlson was not buying it at all. “I have a bunch of questions,” he said. “The first is, whose cars are you going to flip?” Unsurprisingly, Bittle can’t explain his reasoning, giving Carlson plenty of openings to attack.

Bittle uses the excuse of hyperbolic language, but he can’t hide the fact that he’s advocating for violence and civil unrest, even though he clearly doesn’t know what he’s talking about at all. The problem is, Bittle isn’t stupid. He’s clearly an intelligent person, he’s articulate and he can convince naive liberal college students into following him. He may not have any valid points, but he can still get people to follow him into performing violent acts. And that’s potentially dangerous.