News that Donald Trump’s travel ban was being partially reinstated by the Supreme Court garnered a lot of mixed opinions. Conservatives were thrilled. Liberals, on the other hand? Well, they were furious. But they don’t seem to really know what they’re even mad about[1]. 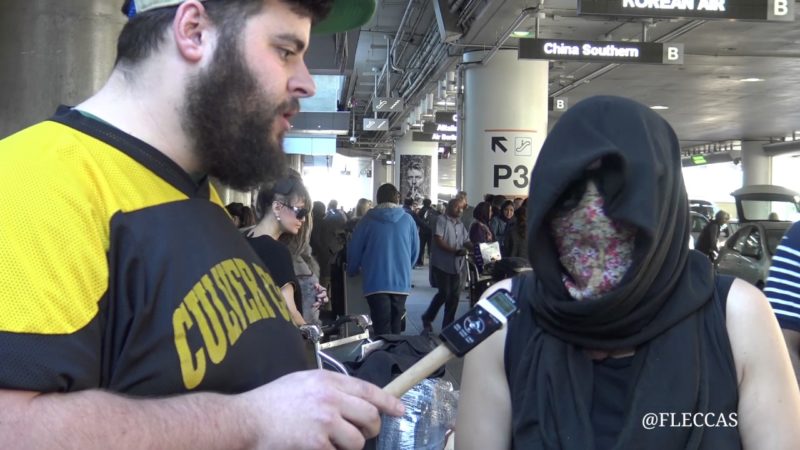 Anti-Trump liberals decided to stage a protest at Los Angeles International Airport after the Supreme Court’s decision on the travel ban was handed down. But there seemed to be some confusion about what, exactly, they were protesting. A video posted by “Fleccas Talks” showed Fleccas interviewing the protesters, who spewed the typical liberal talking points.

When Fleccas asked one protester, sporting blue and green hair, what she was angry about, she replied, “Um, everything. Sexism, misogyny, Trump, Pence, the American government, capitalism, f***ing, the patriarchy. Everything.”

“People that are coming from other countries … whether they don’t think that gay rights are valid or don’t believe in human rights, that isn’t their responsibility because they’re refugees. The responsibility is on us as America to change our country,” she added later. This person also admitted that she has no idea what Sharia law is.

Another protester argued that the United States has brought terrorism onto itself. “[Terrorists] do, obviously, terrible things, but we also, as a Democracy, as a society that wants to move toward nonviolence and humanism, have to acknowledge that we do things that evoke rage, justified rage sometimes,” she said. “I mean, in America, hate crimes have gone through the roof.”

The proof for her claims? An incident that she claimed was a Muslim hate crime, but turned out to be a road-rage incident perpetuated by an illegal immigrant.

An “anonymous” Antifa protester floated another brilliant idea: Americans just need to “live off the land.” Yet, another protester spent his time blowing bubbles — because everyone knows blowing bubbles is what really makes a difference!

Do these people really expect to be taken seriously when they have so little understanding of basic facts and make such gigantic fools of themselves?