You Can Pry My Free Dish Network Shotgun From My Cold, Dead Hands 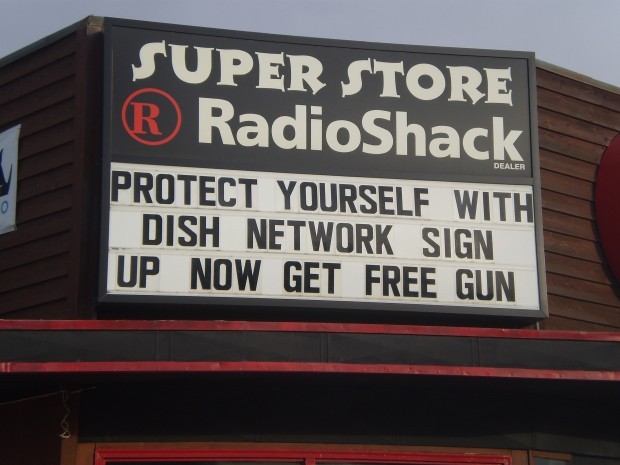 Originally posted at NewsReal’s That’s What She Said[1]
…

Business has tripled at a Montana Radio Shack offering a free firearm with some Dish Network purchases[2]:

“We have people literally stop in to take pictures of the sign,” Levy said.

Qualifying customers have the choice between a Hi Point 380 pistol or a 20-gauge shotgun.

The deal is only good for new Dish Network customers and they must buy a certain amount of equipment to qualify for the free gun.

After the customer signs a service contract and sets up an install date, they are given a gift certificate for their gun. They can also opt for a $50 gift card from Pizza Hut if they prefer, Strand said. And customers who purchase new Dish Network service that don’t qualify for a firearm are still given the Pizza Hut gift card.

Predictably, anti-gun leftists have this promo in their cross-hairs. A Rutgers Daily Targum editorial calls it “a wildly irresponsible promotion[3].”  And a CNET writer seems to have developed a strange new respect for family values[4]:

Tell that to the 10-year-old Louisiana boy who used his mom’s gun to protect his 8-year-old sister[5] from a team of thugs breaking into their home.

Tell that to Kristen Holbert, a Tennessee woman whose instinct to protect her unborn child kicked in[6] immediately when burglars showed up at her door. They didn’t stick around when they saw her point her boyfriend’s 12-gauge at them.

Tell that to Alyssa Gutierrez, a New Mexico girl who armed herself with a loaded rifle and scared off a gang of home intruders the week before she started sixth grade[7].

In the urban hipster bubble where this CNET writer likely lives, “family values” are about relying on a uniformed member of someone else’s family to rush to your ironically decorated apartment with sirens blaring when criminals show up. I’m betting he’ll be in for a shock the first time he has to wait minutes when seconds count.

Follow Jenn on Twitter and read more of her work at JennQPublic.com, NewsReal[9], and That’s What She Said[10].