You Meet The Nicest People At The Occupy Wall Street Protests

One of the Occupy crowd that was “fighting the power” in Seattle turned out to be a man who exposed himself to children five times in the area[1]. He sounds like the area he most wants to “occupy” is the space next to your kid.

Then there was the rape in Cleveland[2].

According to police reports, the 19-year-old student was instructed by “Occupy Cleveland” personnel to “share a tent with the suspect due to a shortage of tents.” The suspect identified himself as “Leland” to the woman. The woman told police that after she had thought the suspect went to sleep in his own bed, she slept in a sleeping bag provided to her by the rally.

The student went to school Monday and told a teacher about her sexual assault incident in Public Square – which is being classified as “kidnapping/rape” – prompting the teacher to immediately contact the authorities.

Wow, who would have thought that the “left-wing version of the Tea Party” would feature protesters raping each other? (PS: If it were up to me, “Leland” would get the death penalty if he was convicted and then, left-wing protesters could start carrying around “Free Leland” signs in a few years.)

How about this guy? Do you think he’d be on the front page of every newspaper in America if he did this at a Tea Party[3]? 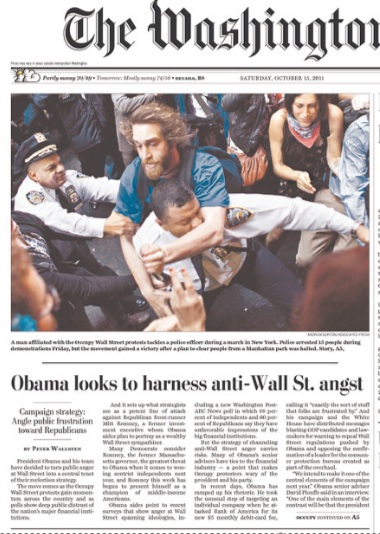 So, is this guy just one of the many criminals attending the protest? After all, there have been 800 arrests[5] and they’re demanding that the charges be dropped or they’ll clog up the court system (Of course, the best response to that strategy is to impose the maximum sentences in every case to send a message).

On the other hand, could that protester be part of something more sinister? After all, both the Communist Party and The American Nazi Party have endorsed the efforts of their fellow socialists[6].

In a move that may redefine the term “strange bedfellows,” the American Nazi Party issued an official endorsement of the Occupy Wall Street protest movement on Sunday afternoon. The announcement put the organization, a self-described “National Socialist” political party, in company with the Socialist Party USA, which explained its own support for the left-wing protesters in a nationwide conference call last Tuesday night, crediting organized labor with the protests’ strength and sophistication to date.

“I bring greetings and solidarity from the Communist Party,” Bachtell said to hoots and applause. “We are here, marching side-by-side. We’ll sleep here. We’ll be with this movement ’til the very — ’til we make all the changes that we know we have to make.”

Nazis, communists, criminals — but they’re supporting a liberal cause; so the papers give them favorable coverage and even the President of the United States is sucking up to them.

The more sunlight that comes in on this collection of red cockroaches in the Occupy Wall Street movement, the more they’re going to scatter. So, keep protesting, put microphones in their faces, and let people see exactly where the modern liberal movement will take us if they have their way.