* Since Friday of last week, I’ve been in Las Vegas, Nevada working with Dustin Stockton.com[1] and Western Representation PAC[2], both of which have been doing a final get-out-the-vote push to try to get the GOP over-the-top in the state.

Today, I’m still in Vegas, but I’m covering the election for The Tea Party News Network[3]. You’ll be able to watch a live feed of our broadcast right here and follow our tweets at the hashtag #TeaPartyVotes.

Make sure to check out the broadcast and head back to Right Wing News all day for the latest information.

* Here are the poll closing times for the key states tonight in the presidential race. Unless it’s really close, you should start to see these states called an hour or two after polls close.

* Here are some indicators to watch for that could give you an idea of which way it’s leaning.

— If Romney loses Virginia, North Carolina, or Florida, odds are that Obama is going to pull this race out.
— If Obama loses Pennsylvania, Michigan, or Minnesota, then Romney probably has it in the bag.
— If both candidates win all the above states, then it COULD come down to Ohio.

Also, since the big polling dispute is over whether Democrats are being dramatically oversampled, watch the margins. If Mitt wins North Carolina by 6-7 points or either Florida or Virginia, it could be a strong indication that he’s going to have a really big night across the board.

* This is a VERY IMPORTANT REMINDER: Early exit polls are almost always HEAVILY SLANTED towards the Democrats. In 2004, for example, you’d have thought Kerry was on track to win in a walk — if you believed the early exit polls[4]. Don’t be surprised if you hear exit poll numbers this afternoon and since they’re hard to confirm, you shouldn’t even be surprised if they’re made up (which is also something that happened in 2004). Point being: Don’t freak out or think there’s no point in voting because of any exit poll data you hear today.

* Four sets of exit poll numbers to keep in mind.

Gallup’s numbers are a little better than Rasmussen’s breakdown this time around. Most pollsters on the state level are assuming numbers at a range that goes from a little below those 2008 numbers to the stats you see in the CNN poll there.

* I am on the same page as Josh Jordan over at The Corner[5] on independents.

Over the last few days the independents have been returning back to Romney, however, indicating that the final vote Tuesday might revert back to polling from the days just before Sandy made landfall. Rasmussen has seen Romney’s lead with independents jump from three points to fifteen. The Washington Post tracking poll moved from a tie with independents on Saturday to a three-point lead for Romney on Sunday.

One of the keys to victory for Romney tomorrow is to win big with independents. In 2008, Obama beat McCain among independents by eight points. If Romney wins independents by eight points this year, Obama’s win in 2008 drops from 7.2 points to 2.6 points, even with a repeat wave-election turnout for Democrats. If the crowds Romney drew in Ohio and Pennsylvania are any indication, GOP enthusiasm is going to surprise a lot of pundits tomorrow, and they should they erase the seven-point turnout advantage Democrats had in 2008. If both of those things happen, Romney is not only in position to win, but has a chance to win big.

* At the state level, most pollsters seem to be expecting Democrats to achieve the sort of advantage over Republicans that you’d see in a once every 50 years wave election. This is despite the fact that Republicans were the ones who had that sort of advantage in the 2010 elections, independents are going strongly in the other direction, and there is little if any anecdotal evidence that suggests Democrats have any sort of significant (if any at all) enthusiasm advantage over Republicans.

This is why people have a legitimate reason to be deeply suspicious of the polling data that they’re seeing.

* Jim Geraghty[6] points out that BOTH CAMPAIGNS are spending the final week-end of the campaign in what were not so long ago considered solid blue gimmies for Obama. That should be a hint about how both campaigns REALLY view the race.

Obama is in big trouble in Wisconsin. He is spending his last weekend in a state that last went Republican in the 1984 Reagan landslide.

Team Romney is going hard after Pennsylvania because both internal and public polling show significant movement toward Romney in recent days. Yesterday, Rep. Ryan and Sen. Marco Rubio drew large and enthusiastic crowds in Pennsylvania. On Sunday, Romney will hold a campaign rally in the Philadelphia suburbs. Who would have thought that Obama would spend the last days of the campaign defending a solidly blue state, while Romney makes a play for another one?

* Last night, while compiling election predictions, it was amusing to note that for the most part, the Republicans were predicting Mitt will win, while the Dems were saying Obama is going to come out on top. In other words, the polling isn’t reliable and most people are just making educated guesses shaped more by their own partisan leaning than they probably realized.

* Well, this certainly sounds like it’s on the up-and-up and there is absolutely no cheating being planned in Philadelphia whatsoever[7].

Court-appointed Republican poll inspectors are being forcibly removed from voting stations in some Philadelphia wards and replaced in some cases by Democratic inspectors and even members of the Black Panthers, according to GOP officials.

* Jim Geraghty[8] is checking a number of key counties today to compare how they did in 2008 to today. Here’s one of them:

Four years ago, the Election Day vote went well enough for John McCain to shift from getting squashed in the early vote by 25 points to losing by 6 points. A similar 19-point shift in this cycle would put Romney ahead by 6 percentage points.

* For whatever it’s worth, I asked my best Romney campaign source if Romney is going to win today. That person gave me a “Yes.” No qualifiers.

* Per Bethany Mandel, one of her friends has this creepy pseudo-North Korean Obama mural on the wall of her polling place. 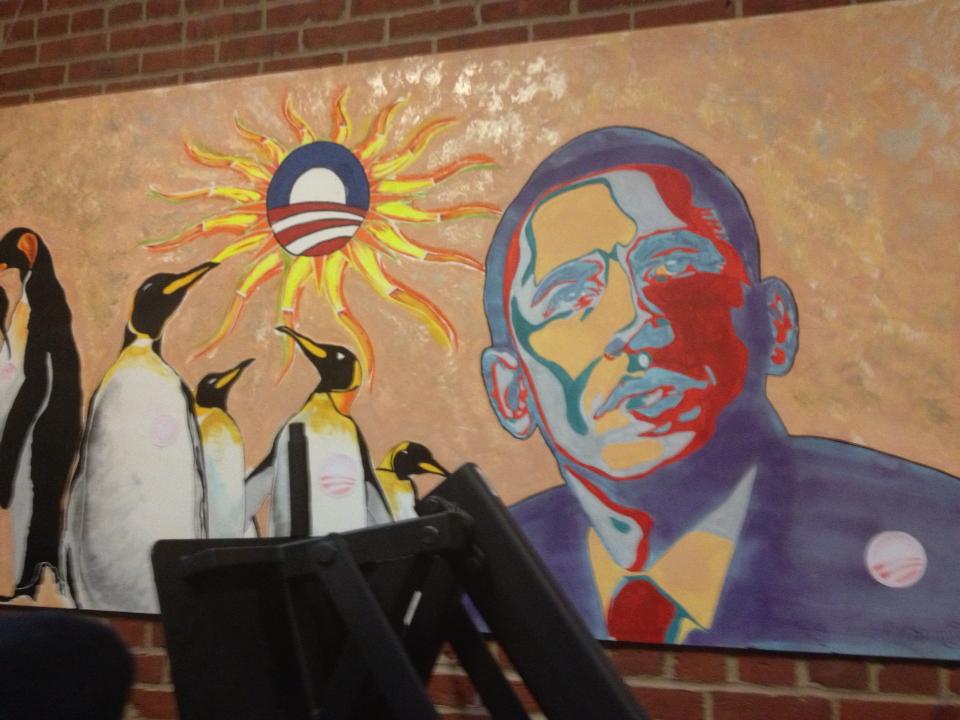 “For this many inspectors to be ejected from polling places is rare, even for Philadelphia,” the official told FoxNews.com.

* There’s not a lot of hard data out today, but the info that’s out looks good for Romney[11]. For example…

* Romney has done considerably better than expected in the early voting[12] in Ohio.

In a discussion on Twitter, Silver and Wasserman focused largely on the surprise changes in turnout in many of Ohio’s counties. While total early voting in Ohio only increased by 2.44% from 2008, early voting in counties that voted heavily for Kerry/Obama declined 4.1% while counties that voted heavily Bush/McCain increased their early voting by a shocking 14.39%. Wasserman, while still predicting an Obama victory, suggested that trend meant a tighter race in Ohio than expected and suggested it might undercut Nate Silver’s famous forecast. Nate Silver’s response: “I’ll stick with the 538 forecast in OH. I disagree that the early voting data there provides much reason to doubt the polls.”

The next important piece of data is what the polls consistently report: Obama leads by huge margins among early voters but trails Romney among those who say they will vote on election day. This inverse in voting segments is why the proportion of early votes in the total votes – and that virtually every poll overestimated this proportion – is so tantamount. In most polls (which usually only have Obama leading by a small margin, although some give him a more comfortable ~+5%), lowering the percentage of early votes in the polling sample means lowering Obama’s lead drastically. And when Obama’s lead is only one or two percentage points, that can mean handing the election to Mitt Romney.

* Another couple of Ohio counties. One is up for Romney and another is down for Obama[14].

* Drudge has out exit polls.

This is a VERY IMPORTANT REMINDER: Early exit polls are almost always HEAVILY SLANTED towards the Democrats. In 2004, for example, you’d have thought Kerry was on track to win in a walk — if you believed the early exit polls[4]. Don’t be surprised if you hear exit poll numbers this afternoon and since they’re hard to confirm, you shouldn’t even be surprised if they’re made up (which is also something that happened in 2004). Point being: Don’t freak out or think there’s no point in voting because of any exit poll data you hear today.

* Indiana has been called for Romney early. That was a state Obama won in 2008, but it was a given for Mitt this time around. Hopefully, the early call means a big margin for Mitt in the state that will help Richard Mourdock win his Senate race.

* Here’s a breakdown of the key Senate races to watch tonight.[16]

* More good news out of Ohio. Cuyahoga County is the key county for Democrats in the state and their numbers are way down from 2008[17].

* It’s 8:05 PM EST and states are being called, but no swing states yet. The exit polls show Obama doing really well, but they always do that. We’re still waiting for the swing states to break.

* AP has called the Florida Senate race for Bill Nelson over Connie Mack. That was expected.

Mourdock running eleven percentage points behind Mitt, has lost the lead, and the Dem cities haven’t started to come in.

* Angus King wins in Maine. Independent who may caucus with either party, takes Olympia Snowe’s seat.

* Dick Morris is looking at the Florida numbers and saying Romney is going to win in a walk.

* 8:37 EST: CNN is saying Romney will win both Florida and Virginia. but no call yet. If this is so, Romney only needs to win NC — which should happen — and he has all the early swing states he needed. Excellent start!

* Obama wins Michigan. That was a state I was hoping Mitt could make competitive, although I don’t think the campaign put much effort into it.

* Romney loses PA. That’s also disappointing because it was a potential swing state. It also PROBABLY means that this is going to be a close election and Mitt will likely need Ohio to win.

* Alan Grayson won. It was expected in his district, but still, Ugh: Grayson is just a horrible human being.

* 9:43 EST. MA HAS NOT been called for Warren, but Richard Mourdock has gone down to defeat and so has Tommy Thompson. Retaking the Senate is definitely out of reach for the GOP now.

* 9:54 EST. New Hampshire called for Obama. Mass called officially now for Warren. Poor Brown. He was a great candidate who ran an excellent race, but the state is just too blue for him.

* NBC calls Ohio for Obama. Well, since Mitt noted that he didn’t write a concession speech, he’s going to have to wing it.

* GOP Grabs 30 Governor Seats, Highest for Either Party in Over a Decade[19]