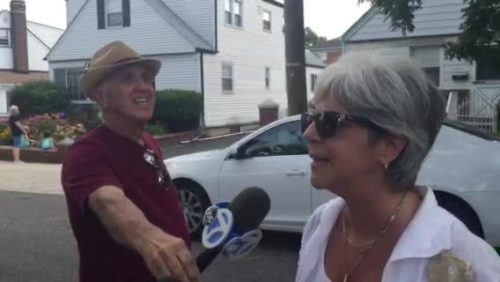 New Yorkers are tough. And none are more tough than this woman who let Mayor de Blasio[2] have it when she happened upon him doing a press event in the street. She boldly asked the questions that all New Yorkers should be asking. She wanted to know why he went to Germany to protest this country at the G20 Summit instead of being home in New York to support his city in the wake of the murder of an NYPD officer and to welcome a new class of 500 NYPD recruits. She wanted to know why he went to a foreign nation to hang out with anarchists instead of helping New York. Good questions, Ms. Paladino. And we all want the answers.

“I want to know why you let your police officers down and our country down by going to Germany and protesting against our country,”

“I want to know why you are doing that! OK? I don’t care about the trees!”

“And pay your police officers! Stop spending it on money to go protest against our country!”

He ran away! It’s time he starts to pay attention…this is a big show. This means nothing. He could have sent anyone here to talk to us about trees.

Don’t talk to me about trees. Talk to me about protection of our city. Of our citizens. And what you’re going to do for our police officers. Because you left them high and dry, on more than one occasion. Can’t wait for Election Day. Buddy, you are OUT!”

Only time will tell if New York City will ever elect someone other than a meddling Leftist loon for mayor. It seems most New Yorkers are perfectly happy to be micromanaged by their city government. Hopefully this courageous woman is indicative of a trend in the Big Apple. Maybe the tide is turning and New Yorkers have had enough. We will see in the next election. In the meantime, keep fighting Ms. Paladino!