The morgue’s barely functioning cooling system was to blame – hardly a surprise in the oil-rich yet impoverished nation whose health-care system has collapsed under the socialist government. Decomposing for two days in the tropical heat, the corpse finally exploded in a spray of toxic fluids and gasses. The ghastly incident earlier this month necessitated the partial evacuation of the hospital, University Hospital Antonio Patricio de Alcalá, located in Cumaná — a city of 825,000 in eastern Venezuela. Patients in nearby rooms and corridors were sickened to their stomachs by the stench.

“It’s not the first time that a body exploded,” a hospital employee told a Venezuelan media outlet. “It has already occurred two times since the middle of September.”

The hospital certainly was not always a house of horrors. It was once regarded as one of Venezuela’s best public hospitals — a standard-bearer for health care, according to the Venezuela news site La Patilla.

But then came socialism.

Recently, La Patilla sent a reporter with a hidden camera through the facility: it revealed patients unattended in hallways and the emergency room, shortages of essential equipment, and a lack of air conditioning in wards. The hospital is yet another example of economic decay under “21st Century Socialism” – what Venezuela’s late firebrand president, Hugo Chávez, had pledged would turn the South American nation into a workers paradise. Socialism, however, has turned Venezuela into a workers hell.

This particular version of hell seems to be inspired by Lucio Fulci movies.

The exploding corpses can’t be easy to clean up, given the unavailability of such luxuries as disinfectants in the workers’ paradise. But someone must think such hardships are worth enduring for the sake of combatting income inequality, or America wouldn’t be headed down the same path. 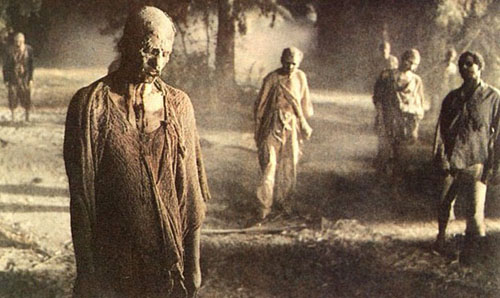 Embodiments of socialism ready to blow.

On tips from Torcer and Bodhisattva. Cross-posted at Moonbattery.