In the end, everyone gets screwed by socialism — even those who impose it. Venezuela has the world’s largest proven petroleum reserves. Its socialist government habitually blames the problems it causes on the USA, which is used as a bogeyman by demagogues like Hugo Chavez and his successor Nicolas Maduro. Yet we read this:

Even with the roughly 50,000 barrels of US light crude imports a day, Venezuela’s hemorrhaging state-run oil industry may not have enough safeguards in place to save itself. “Venezuela’s state oil company, PDVSA, is struggling to pay for the foreign oil. Some tankers wait in port for as long as two weeks to be paid, and sometimes they leave because of a lack of payment, said an oil executive who requested anonymity to avoid reprisals from the government, explains the [New York] Times…

That’s right: they have to import oil from the Great Satan. Talk about bringing the coals to Newcastle.

Venezuela is still sitting on a lake of oil. But the private sector has been destroyed, and government bureaucrats are only good at stealing and smothering, not at constructive activities like getting oil out from under the ground. Due to corruption and mismanagement, the nationalized oil industry is too crippled by debt to function.

Milton Friedman said that if you put Big Government in charge of the Sahara, in 5 years you would have a shortage of sand. Venezuela proves him correct. 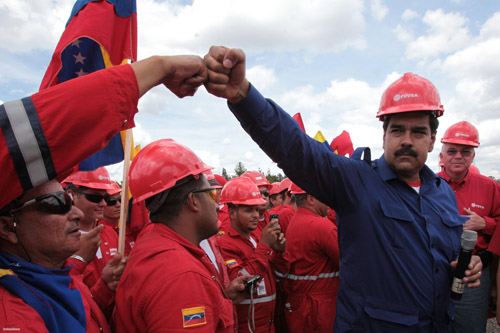 Maduro’s oil worker costume is fooling no one.