Ilya Somin reminds us why we have to be especially sure to acknowledge Victims of Communism Day today:

This year is a particularly important time to remember the victims of Communism because of the approaching one hundredth anniversary of the October Revolution – Bolshevik takeover of Russia. The Soviet Union was not the most oppressive communist regime. It probably did not match the even more thoroughgoing totalitarianism of the Khmer Rouge and North Korea. Nor did it kill the most people – a record held by Mao Zedong the Chinese communists. But the Soviet experiment was the principal model for all the later communist states, and it is hard to imagine communists seizing control of so much of the world without it. In addition to the significant material aid that the Soviets provided to communists in other nations, the communist seizure of power in Russia also greatly boosted the ideology’s prospects elsewhere.

Communist regimes killed about 100 million of their own people in the course of the twentieth century, enslaving many hundreds of millions more, as documented authoritatively in The Black Book of Communism.

The New York Times, which lied to the American public to cover Stalin’s atrocities, acknowledges Victims of Communism Day just as you might expect — with more whitewashing. Look what they published over the weekend: 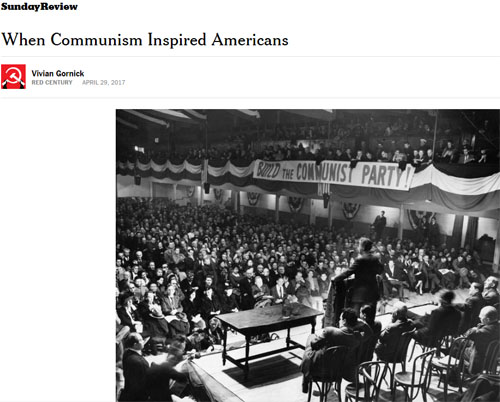 If it were up to the people running the “Paper of Record,” most people reading this would probably die in gulags or in the basements of bland-looking government buildings for the crime of not wanting to be enslaved.

Even now, one-fifth of the world’s population lives under communist tyranny in places like China, and there are powerful people evil enough to want to impose it on millions more. The struggle of freedom and dignity against authoritarianism and collectivism is not over.

On tips from Lyle, Sean C, and Torcer. Cross-posted at Moonbattery.