It isn’t hyperbole. New York Mayor Bill de Blasio really is a communist. Here he is quoted from a fawning recent interview with his fellow moonbats at New York Magazine:

What’s been hardest is the way our legal system is structured to favor private property.

The alternative to private property is communism, a system that reduces regular people to literal slaves of the government. It grants the bigwigs running the government total power over everything:

Look, if I had my druthers, the city government would determine every single plot of land, how development would proceed. And there would be very stringent requirements around income levels and rents. That’s a world I’d love to see, and I think what we have, in this city at least, are people who would love to have the New Deal back, on one level. They’d love to have a very, very powerful government, including a federal government, involved in directly addressing their day-to-day reality.

As de Blasio makes clear, communism is a totalitarian system. Big Government makes all the decisions; the people under it do what they are told in return for their sustenance, much like farm animals. 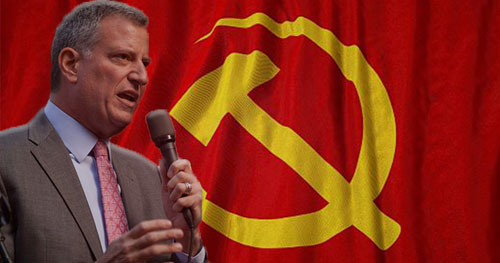