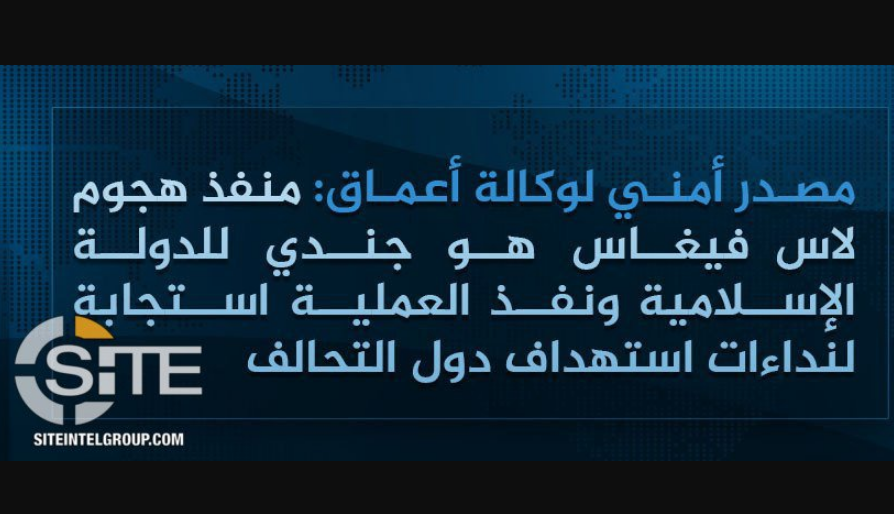 According to a group that monitors the online activity of Islamic terrorists, ISIS has claimed responsibility for the mass shooting at a country music festival outside of the Mandalay Bay Resort on the Las Vegas Strip.

According to SITE Intel Group, the Islamic State claims that the shooter, Stephen Paddock, had converted to Islam months ago.

After this claim surfaced, the FBI said that they had determined that Paddock had “no connection with an international terrorist group.” So far, ISIS has not offered any proof of their claim. The SITE group translated the Arabic posted by ISIS and sent this tweet earlier today: “#BREAKING: #ISIS claimed #LasVegas attack, reporting through ‘Amaq that executor is one of its “soldiers” & he converted to Islam months ago.”

BREAKING: #ISIS[2] claimed #LasVegas[3] attack, reporting through 'Amaq that executor is one of its "soldiers" & he converted to Islam months ago pic.twitter.com/4E85vEIUzH[4]

Back in May, SITE noted that ISIS featured the Strip in a video and that in 2014, a group affiliated with al Qaeda suggested that Las Vegas would be a suitable target. Islamic terrorism has moved from attacking governments and businesses to instead attacking places where normal people gather, choosing to target places and events that are attended by regular people in order to make the wider population be too fearful to attend their cultural and community events.

Local police are saying that they believed that Paddock acted alone.

With over 50 confirmed deaths, this shooting might end up being the most deadly mass shooting in history. Andres Breivik murdered 77 people in July of 2011, where he used a bomb to murder eight people then proceeded to shoot dead 69 people at a summer camp.

Paddock was a 64 year-old man who has lived in California, Florida and several cities in Nevada and shot himself before law enforcement could break into his room in the Mandalay Bay Resort on the Las Vegas Strip. Paddock had checked into the hotel on Thursday, September 28th and was found with at least ten guns as confirmed by Sheriff Lombardo.[6] Paddock had set up cameras so he would be warned of the police before they arrived. Paddock’s girlfriend was detained for a few hours after the attack and then released when it was determined that she was not a suspect. Paddock’s family has denied any knowledge, with one of his brothers saying that he hadn’t spoken to Stephen in ten years.