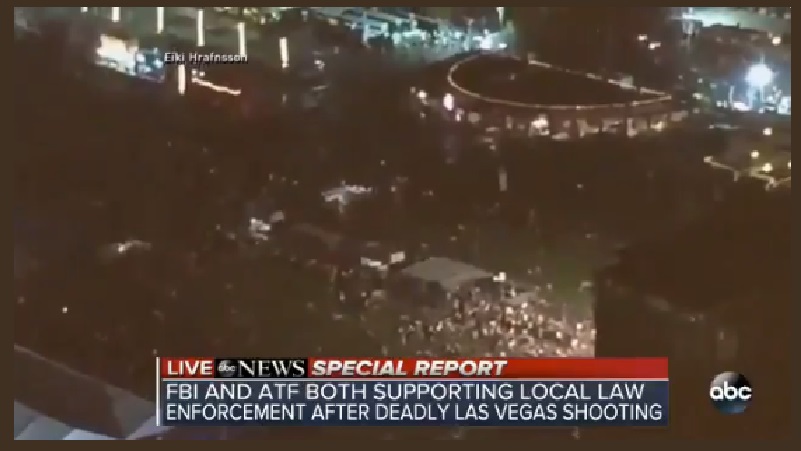 Overhead footage of the worst shooting in American history has now been confirmed to be accurate.

This 2:20 minute video by ABC does not reflect the current death count of over 50 people, only listing two deaths and 24 injuries at the time it was posted.

Jake, a witness who provided the footage, says he was going to the 64th floor of another hotel to go to a lounge with a view of the Strip and nobody in the bar “had any idea what was going on” at the Mandalay. He says that he had a “bird’s eye view” and he and his friend saw people running away and being gunned down by the shooter who was on the 32nd floor. When he was asked if he could see the shooter, Jake said that they couldn’t see the Mandalay Bay itself which was behind them, they could only see the music festival and people who were running away. When asked to clarify, Jake said at the moment he could hear the gunshots, perhaps a machine gun, and he went to the lobby to find out more, but when they were at the lobby they were met with the smell of gun powder and people running into the elevator to get away. At that time, there was more gun fire inside the Mandalay. He used Periscope to film the situation with over 10,000 live viewers.  When he met police officers, he was advised to run away. He said that he heard gunshots that he believes were the police “dealing with the shooter” while he was in range to hear it.

Stephen Paddock has been identified as the shooter. He was a 64 year-old resident who had previously lived in California and Florida and in Nevada has lived in Reno, Henderson and Mesquite[4]. He checked into the Mandalay Bay on the Las Vegas Strip on Thursday, September 28th. Barricaded with at least ten guns on the 32nd floor, he opened fire on a country music concert below and has so far killed at least 50 people and wounded 400 others. Video footage has emerged of the shots sprayed into the crouching crowd below with the silence while he changed clips filled with both panic and concert goers screaming for order, for the crowds to stop pushing and to stay crouched down.

So far, President Trump has tweeted condolences and one of our writers here at Right Wing News is still trying to get in touch with her friends after living in Vegas for twenty years.

Paddock’s brother has said that Stephen was “just a guy” who “freaked” and had chosen to retire to Vegas for the gambling. Social media reaction is intense, with one professional gambler and Instagram celebrity Dan Bilzerian saying “Holy f–k this girl just got shot in the f–king head… Some kind of mass shooting…Guy had a heavy caliber weapon for sure…Saw a girl f–king get shot in the face right next to me, her brains f–king hanging out.”